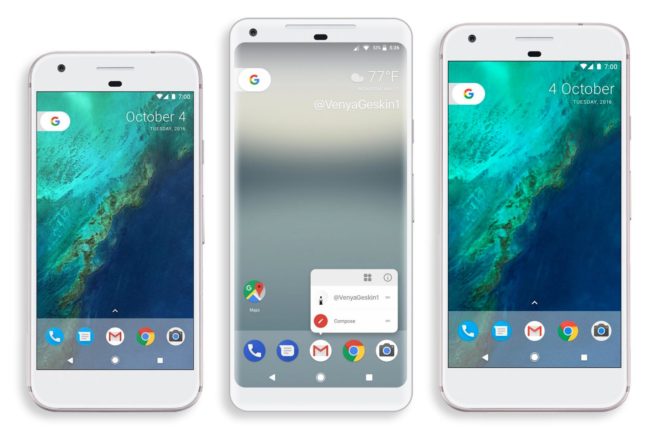 Google’s phones 2 and 2XL are featured with 5 inch Pixel 2 and 6 inch Pixel 2XL respectively. The Pixel 2 has got an aluminium case available in Black, White and Blue. Whereas Pixel 2 XL is available only in black and white. Both the phones are featured with all-day battery and superfast charging. The phone is slimmer and tidier this time. The camera lens is being covered by a glass panel. Pixel 2 is quite comfortable to hold and fits well in your hands.

Pixel 2 has got 12 megapixel camera and the aperture is much wider with f/1.8.

One noteworthy feature Pixel 2 is that it is powered by the Snapdragon 835, and is accompanied by 4GB RAM. Pixel users will be the first one to receive the updates for Android Security. Google Pixel 2 included Android Oreo. The base storage of the phone will be 64 GB having an option of 128 GB too due to which it does not have any slot of SD card in the phone. The display of the phone supports DCI P3 colour gamut giving your phone a more colorful panel.

Pixel 2 will allow users to click professional pictures on a portrait mode and pictures can even be clicked with a blurred background. Google Pixel 2 will have the voice assistant active. Google Pixel 2 will not have any headphone jack. Google Pixel 2 has got an active edge called as squeezable sides using which it can be identified that Google Assistant needs to be active now. It has also got a special button to add shortcuts to a number of tasks.

Google Home Mini is a small version of Google’s voice activate smart speaker. Google Home Max which are the speakers and are 20 times more powerful than the original Google Home. With the help of Google Assistant it will allow users to hear whatever is being said by Google even when the music is playing.