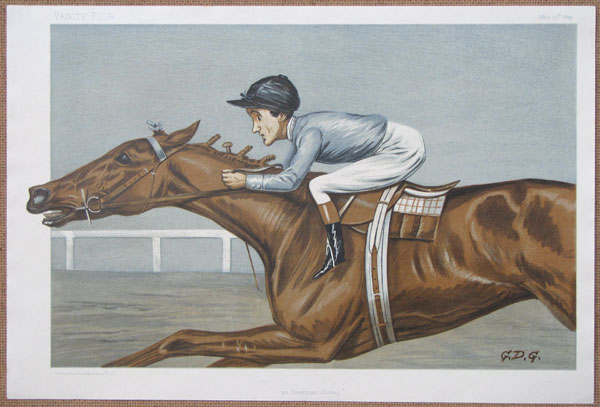 Do you know the expression “on your tod”? It means being alone, and is actually an example of Cockney rhyming slang –“Tod Sloan, on your own”. As is often the case with rhyming slang, the rhyme has been lost over time, leaving just “on your tod”.

But who was Tod Sloan? His full name was James Todhunter Sloan and he was an American jockey who rode and won races not only in America but also in Great Britain and continental Europe in the late 19th and early 20th centuries. He developed a new and highly successful riding style that involving shortening the stirrups and bending forwards so that the heads of jockey and horse were very close together. This is now the standard way of riding a racehorse but was revolutionary at the time.

Tod Sloan won races for many of the top owners of the day, including the Prince of Wales (the future King Edward VII) and grew very rich as a result. He spent his money on partying and gambling and gained a reputation as a rabble-rouser and hell-raiser.

This was his undoing, because he was eventually refused a licence to race by the Jockey Club of Great Britain on the grounds that his behaviour tarnished the image of the sport. The equivalent authorities in France and the United States followed suit, which meant that James Todhunter Sloan’s days as a top jockey were numbered. He sought solace in the bottle and died of liver disease in 1933.

So Tod Sloan did end up friendless and alone, which was a sad end for someone who had never been short of company in his glory days. Some examples of Cockney rhyming slang are particularly appropriate for what they mean, and “on your tod”, recalling the fate of Tod Sloan, is one of them.