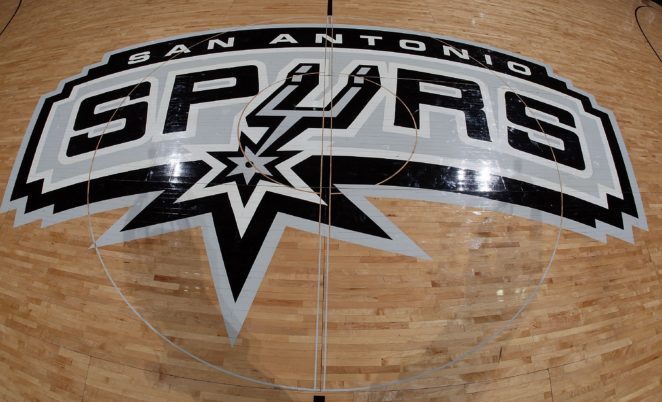 SAN ANTONIO - APRIL 18: The logo of the San Antonio Spurs in Game One of the Western Conference Quarterfinals during the 2009 NBA Playoffs at AT&T Center on April 18, 2009 in San Antonio, Texas. NOTE TO USER: User expressly acknowledges and agrees that, by downloading and or using this photograph, User is consenting to the terms and conditions of the Getty Images License Agreement. (Photo by Ronald Martinez/Getty Images)

The San Antonio Spurs were possibly one injury away from last season’s NBA Championship.  When Kawhi Leonard turned his ankle in the third quarter of Game 1 of the NBA Western Conference Finals against the Golden State Warriors, the Spurs were ahead by 25 points.  However, San Antonio still lost the game 113-111.  That gut-wrenching loss turned into a sweep for the Warriors.  Now, the Spurs must go back to the drawing board so that they can put themselves back into deep playoff contention in a contentious Western Conference.  Let’s see who the Spurs took in this year’s NBA Draft.

White went sort of under the radar in the Pac-12 conference due to #1 pick Markelle Fultz and #2 pick Lonzo Ball taking all of the headlines in the conference at the point guard position.  However, White held his own in the conference with his scoring and his defensive ability.  As we all know, the Spurs are one of the best organizations in finding gems late in the first round.

Although Blossomgame played at small forward in college, he primarily scored most of his points in the paint by persistently going to the rim at all costs.  He went late in the second round because he needs to develop his outside shooting since the NBA is a bit more physical than college basketball.

Overall:  C+.  As usual, the Spurs invest in the long term by taking White and Blossomgame because they will be playoff participants again.  However, taking a point guard and a wing player for the sole purpose of development is a good idea because Tony Parker and Manu Ginobili will not stay around forever.

Sources:  All stats are from NBA.com.  The link is from The Undefeated website.