2 – Number of tournament finals that have been won by teams chasing down the target off the Final dilivrey of the match. The only previous instance before India doing it in the 2018 Asia Cup final was in the final of the 1986 Austral-Asia Cup in Sharjah where Javed Miandad hit a six off the last delivery off Chetan Sharma. 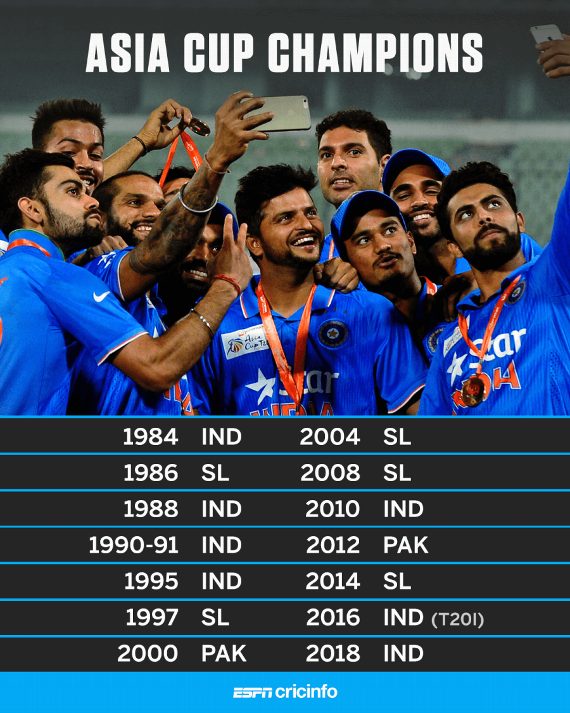 0-8 – Bangladesh’s record in knockout matches across all formats. They have lost five of those eight finals against India: the 2015 World Cup quarter-final, the 2016 Asia Cup (T20I) final, the 2017 Champions Trophy semi-final, the 2018 Nidahas Trophy final and the 2018 Asia Cup final. The other three defeats were against Sri Lanka (two) and Pakistan.

0 – Number of times India have successfully chased down bigger targets than 223 without any individual 50-plus scores. The previous biggest such target India chased was 214 versus New Zealand in Napier in 1999.

2 – Higher individual scores in causes losing in finals in ODIs than Liton Das’ 121. The highest such individual score was Saeed Anwar’s 140 in the third final of Silver Jubilee Independence Cup in 1998 against India in Dhaka.

102 – Total runs for which Bangladesh lost their 10 wickets, after the openers Liton and Mehidy Hasan shared a 120-run stand. Bangladesh were going at just under six runs an over until they lost the first wicket but then ended with a run rate of just past 4.50 in less than 50 overs.