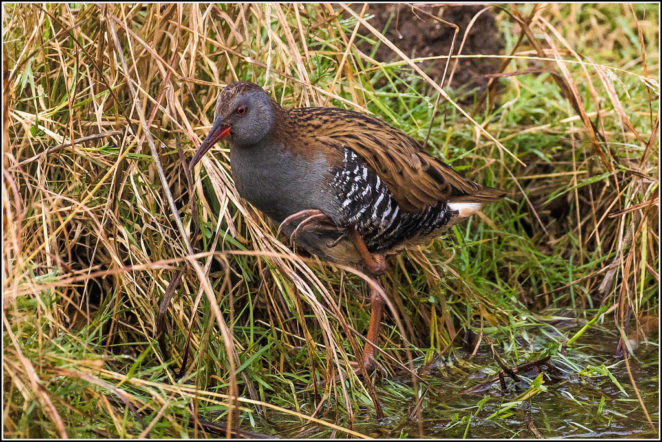 The water rail (Rallus aquaticus) is found across Europe apart from northern Scandinavia. It lives in swamps, fens and reed beds, where it is very difficult to see due to its habit of hiding in dense cover whenever any threat approaches.

The water rail is 280 millimetres (11 inches) long, being similar in shape to a moorhen but with a long red bill. The upperparts are brown with prominent darker streaks, the flanks are barred black and white and the face, throat and underside are blue-grey. There is a white patch under the tail. The legs are flesh-brown and the eyes are red. 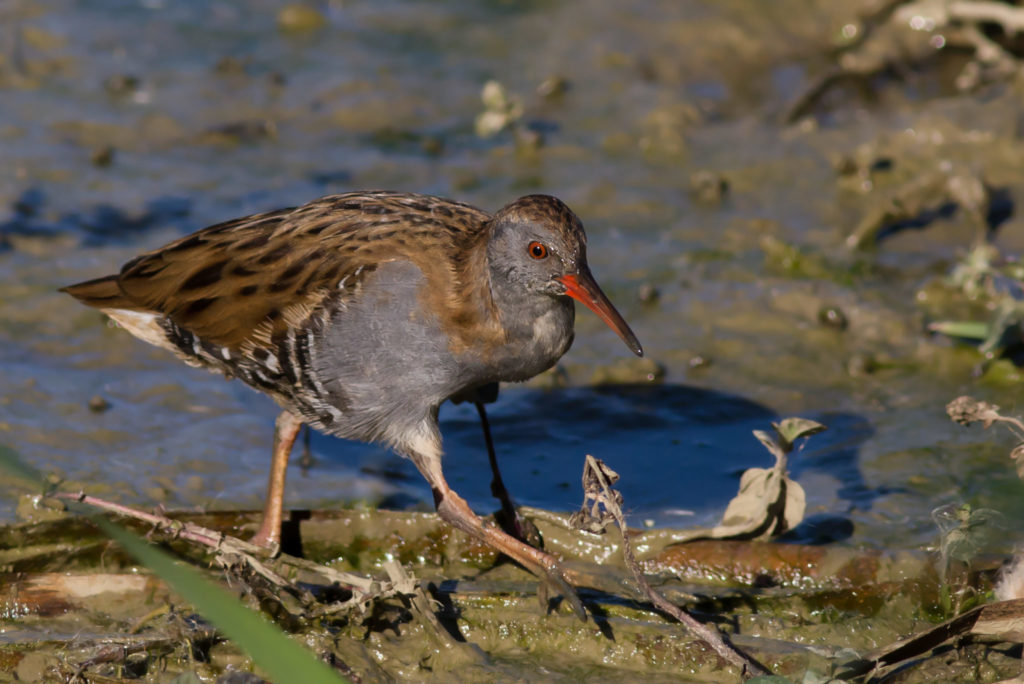 The water rail is more often heard than seen, its call being a series of grunts and squeals, the latter sometimes resembling those of a young pig. It is often heard calling during the night.

The flight is weak, with the long legs and toes trailing behind. During the post-nesting moult water rails lose their flight feathers and are therefore confined to ground movements only.

Water rails feed both on land and water. Their diet is a varied one, including small fish, frogs, shrimps, snails, insects and their larvae, berries, and plant shoots and roots. They will also eat carrion.

The nest is a small flat platform of water plants hidden from view in thick reed, sedge or grass cover. Anything from six to eleven eggs are laid at any time from late March to June. Incubation takes up to 22 days, this being carried out mainly, but not exclusively, by the female bird.

The young are fed at the nest by both parents for the first few days, but they are able to feed themselves quite quickly, at which point they leave the nest but are not yet independent of their parents.

Fledging takes place at anything from twenty to thirty days, but full independence is only achieved at around 55 days.

The main threat to water rail numbers is habitat destruction, which can occur due to land use changes or rising water levels. In the UK active steps are being taken to preserve and re-create reed beds, which should help to protect water rails and other species that rely on this environment.