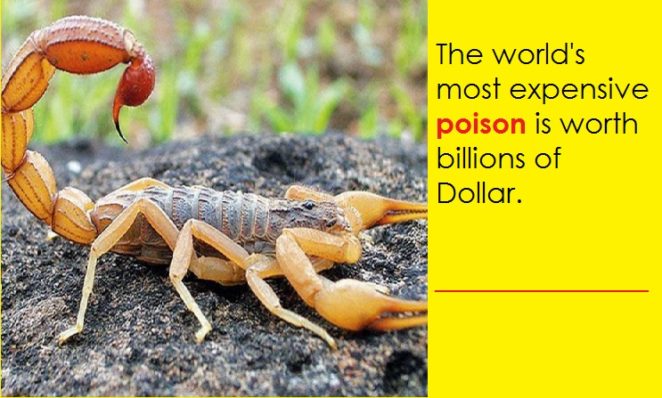 The world’s most expensive poison is found in the “Death stalker Scorpion” If it poisoned you once, then it is very difficult to save from it. That is why the poison of this scorpion is the most expensive in the world.

This dangerous scorpion is belong to the family of ‘Buthid scorpion, While it is also called Israeli and Palestinians Scorpion. This is the world’s most dangerous Scorpio, which is named Leiurus quinquestriatus, due to five parts on its tail.

Its color is yellow and it is longer than 30 to 77 mm and it  is commonly found in the desert in North Africa and Central Asia. This Scorpio is popular worldwide due to its precious poison and its cost of a liters poison is about ($ 10.5 million). However, in some cases its poison is very useful as well.

According to Professor Michael of Tel Aviv University, this poison is being used in many medical investigations and treatment. There are some ingredients present in this poison that are being used pain related medicine.

According to a report from the Fred Hutchinson Cancer Research Center, published in 2013, this Scorpio’s poison prevents cancer cells from being made. Scientists have claimed that this poison also helps in the safe transfer of physical organs and Sometimes the human body refuses to accept them on the basis of pain in the body.

In such a situation, this poison will be converted into a very small amount  and entered into the body, after which it will follow the straightforward immune system and the artificial organ will be less likely to be rejected. Apart from this, poison is also beneficial in bone diseases, with the passage of time human bones start weaken and do not work as if bones work in a young body. Therefore, by using this poison, the bone weakening process can be slowed.

In 2011, a 71 year old man of Cuba claimed that he himself poisoned himself from this Scorpio, as soon as the scorpion poison entered into his body, all his pain disappeared. This process proceed in laboratory to extract poison from these scorpion’s.with the help of electric current, and It is stored in a bottle.However, this process is very complicated and at one time only one drop of poison comes from a stroke. In this case, more than 1000 Scorpion are required to extract a liter poison.

That’s why the price of one liter of this poison is $10.5 million. Be clear this poison effect directly on brain. And keeping the same feature, further investigation continues on this poison. The poison that affects brain and nerves is called ‘neuro toxins’ those who prove to be deadly as well as useful in treatment. For example, it should be careful and used in a very small amount.