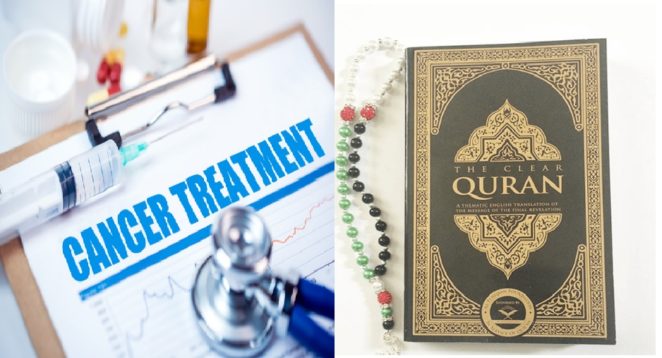 Pakistan – Peer Usmani Ghani belong to a small town of Bahwalpur city of Pakistan and so far treated million of people around the world through Quran therapy.

Peer Osman Ghani said he has not only treated Pakistani patient but also the patient in Middle East, Europe, Japan, America, Turkey and other countries through Quran therapy. He further said that treatment method is very simple and completely free. Just patient needs to give charity in any mosque worth 5 Pakistani Rupees and the non-Muslims are permitted to give this money to their worship places.(Church).

Peer Usman Ghani further said that that he have over 25,000 students worldwide, in which most people are those who were suffering from cancer or any deadly disease, and after getting rid of the cancer and other deadly disease through Quran therapy, after this they dedicated their services to the spiritual way of treatment to help human being and today they are successfully serving humanity through the tent of sacred verses worldwide.

Usman Ghani said that his treatment method is very simple, and patient needs to give 5-6 minutes each week. He further added that he did not restrict this spiritual therapy to his self but he has given this Quran therapy method to student as well and there is no difference between his or his student Quran therapy and both are effective with grace of almighty Allah.

Pir Usman said that he did not make any difference between Muslims and non-Muslims to serve humanity and as a result, of this miracles 89 non-Muslim have accepted Islam. He added 40% of the patients who have come to them have been diagnosed successfully and now they are healthy.

Usman Ghani said that those patients with cancer who do not treat cancer via chemotherapy, their immunity remain active and they are more likely to have health and successful treatment through Quran therapy. However, he said that the patients passing through the chemotherapy process are also recovered. Peer Usman has his own website and every one can interact with him.