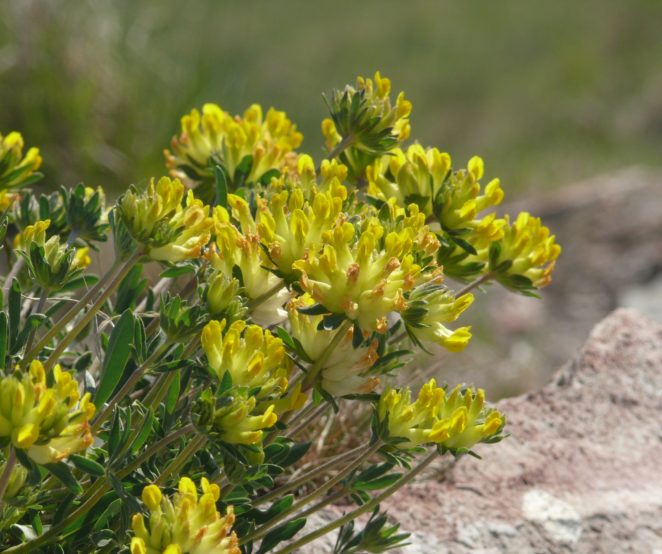 Kidney vetch (Anthyllis vulneraria) favours dry grassland habitats, either on chalk downland or close to coasts. It is common throughout Great Britain. It is a plant that has many local names, including “fingers and thumbs” and “lamb’s foot”. In Yorkshire, East Anglia and Dorset it is known as “lady’s finger” after its silky, finger-like bracts – small leaves that appear just below the flower-heads.

In the Middle Ages the plant was regarded throughout Europe as a medicinal herb, particularly for healing wounds – hence the botanical name “vulneraria”, from the Latin “vulnus”, meaning a wound.

It was called kidney vetch due to the old superstition that a plant that looked in part like a part of the human body must have been so designed by God as a hint that it had a beneficial role in treating ailments of that part of the body. In this case the kidney-shaped flowers were a clue to the plant’s supposed ability to cure kidney diseases.

Kidney vetch grows more or less upright to a height of up to 24 inches (60 cms). The stems and leaves have a silky feel. On each leaf stem the terminal leaflet is much larger than the rest.

The flower-heads, which appear between June and September, are carried on long stalks with leaf-like bracts beneath them. The kidney-shaped flowers, which can be yellow, orange, red or purple, are a rich source of nectar but the stiff petals are too heavy for many small insects to open, so the rewards are mainly on offer to bumble bees.

The flowers go brown as they fade, after which the seed pods are enclosed by the purple-tipped woolly sepals.

Kidney vetch is a food plant of the small blue butterfly.