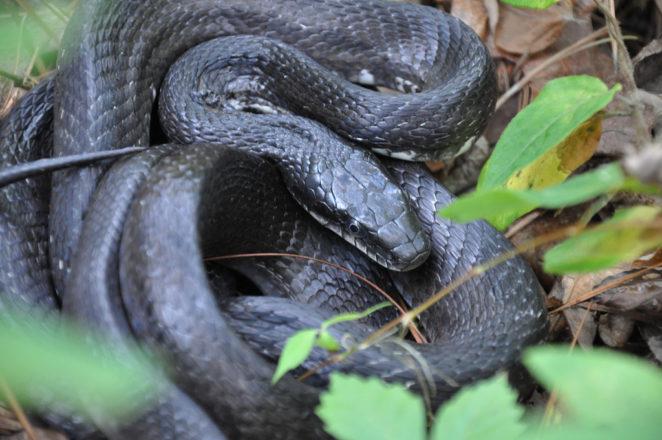 (This story could best be described as “faction” – some fact, but a lot of fiction!)

The mountainous island of São Tomé lies in the Gulf of Guinea off the west coast of Africa, almost bang on the Equator. Near the centre of the island, which is about 30 miles long and 20 miles wide, is a dormant volcano that is covered in dense forest. Nobody knows when the volcano last erupted and nobody is expecting any action of that kind in the foreseeable future.

Of far more interest is the island’s wildlife, and in particular the cobra-preta. This is a black snake – which is exactly how the name translates from Portuguese – that is believed to be the most venomous snake in Africa. The locals on São Tomé say “homem mordido, homem perdido”, which means “man bitten, man lost”.

It is known that the snake lives in the forests of São Tomé, but the question is – how did it get there? Is it simply a local variant of the forest cobra of West Africa? One theory is that the early Portuguese colonists introduced it to the island to get rid of the rats that the settlers had inadvertently brought with them. However, it seems strange that anyone would want to live on an island to which they had deliberately brought Africa’s most dangerous snake.

That was why the experts preferred to take the line that the cobra-preta was a species native to São Tomé. The island does not have many species that are identical with those on the mainland, given the difficulty that animals would have faced in crossing nearly 200 miles of ocean, and the fact that humans did not apparently reach it prior to the Portuguese in the 15th century. São Tomé has several species that are found nowhere else in the world, having evolved in far distant times, so why should the cobra-preta not be one of these?

It was the realization that the cobra-preta was not an introduced species but a native one that saved it. Moves had been underway to eradicate the snake, which clearly presented a danger to the local population, but were it to be lost it would be yet another casualty on the list of species rendered extinct by human hand.

But if the cobra-preta was to be preserved it had to be studied, with specimens captured not least so that its DNA could be examined and its true place on the evolutionary tree determined. This is in addition to the many other reasons why naturalists would want to take a close look at what is essentially a “new” species.

That was why a scientific team assembled at the foot of SãoTomé’s former volcano one day a few years ago. The upper mountain slopes were known to be home to the cobra-preta, but it had also been seen lower down. The team members would need to be alert every step of the way.

The party consisted of six people – three scientists and three assistants, including a local guide. On the night before, the guide had told the party all the stories he knew about the cobra-preta, including the charming legend, dating from 1506, that when a man was bitten by the snake the effect was so sudden and so terrible that his eyes would pop out of his head as he died. They all laughed nervously at that one!

Jake was the assistant on the expedition who was responsible for making sure that all the kit they needed was in place and worked as it should. This included not only the cage in which they would place their specimen, and the tools for grabbing it behind the head and securing it before it could get a chance to strike at anyone, but also the heavy-duty trousers, jackets and gloves that they would need to wear in order to prevent any chance of a bite, as well as providing protection against soldier ants and other creepy-crawlies. Given the hot, steamy conditions of the equatorial forest, this sort of clothing was not particularly comfortable to wear, but they all knew that it was essential. One thing that Jake could not provide was anti-serum to counter the bite of the cobra-preta, given that such a thing did not exist.

There had been heavy rain for several days prior to the expedition, and they set off up the steep, zig-zagging mountain track in what they hoped would be a long enough interval of relative dryness. That turned out to be a forlorn hope, because two hours after they set out the rain came back in torrents.

The path, which was wet enough to start with, was soon several inches deep in mud, making every step a struggle. It was even worse for Jake, loaded down with his bulky kit, who found that his footsteps made such large holes in the mud that it was a real effort to get his feet out again. He was soon at the back of the party, with the others able to make slightly faster progress.

As the rain poured down the slope it began to run across their zigzag path, with walls of water cascading on top of them from the side as they walked. But then things got even worse because the water turned to mud and it carried tree branches and rocks with it. The upper slope of the mountain simply gave way and a full-scale mudslide crashed down on top of them.

Everyone in front of Jake stood no chance and was simply buried in the mud and carried off down the slope. Jake was lucky in that he was only caught by the edge of the mudslide, knocked off his feet and taken a short way down the mountain. He tried to stand, but before he could do so a torn-off tree branch landed on him and pinned him to the ground. He was knocked unconscious and lay still as the bulk of the mudslide passed close by, taking all his companions with it.

When Jake came round he found himself lying on a patch of level ground with undergrowth on one side that had escaped the mudslide. The rainstorm was over and the mud had stopped sliding. He called out but there was no reply apart from the cries of jungle birds.

He soon saw that his right arm and foot were trapped under the branch that fallen on top of him. There was a way of freeing his arm, but only if he could get out of his protective jacket, which had been partly torn open anyway. Once this was achieved he could tackle his foot, and the easiest way of doing this was to ease the foot out of its boot, the toe of which was firmly wedged under the branch. This took some time but was eventually done, with his thick sock staying inside the boot.

So now he was able to stand, with one foot booted and the other bare, and take stock of his surroundings. He caught a movement in the bush to the side of the open space. He took another look. Something black was moving through the undergrowth. It emerged, and a thin black face looked him straight in the eye. A forked tongue flicked out in his direction.

There could be no doubt about it. He had found a cobra-preta. But instead of being equipped with a grabbing pole and a cage he had nothing with which to protect himself. He had jettisoned his protective jacket and had one bare foot.

He took an involuntary step backwards. His unbooted foot touched something on the ground that was soft to the touch. He looked down, and a human eye looked straight back at him.