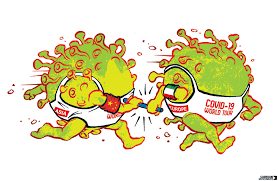 New York Times are reporting that the virus is a pretty stable one and not mutating up or down. It would be nice if it’s weakening but we are thankful for small mercies right now, and very thankful it’s not getting stronger. That later would collapse the system completely and lead to social unrest around the world.

The science revealed COVID-19, in essence, is a pretty identical version in every country of the world. This means that it’s the same virus that has a terrifying 6% death rate in Italy and 0.6% death rate in Germany. This is clear – and somewhat reassuring – evidence each countries health service must be able to deal with a spike of cases so to avoid collapse and so high death rates. This happened quickly in Iran as people carried on jamming mosques for Friday prayer and spreading the disease. When you have a spike, government’s tend to panic and force people to stay home and so the family infected, what I feel is driving the high death rates. Muslim families like Catholic families tend to have three generations all in one house, the kids killing the old.

Now, in Germany, for example, If we throw in all the unrecorded cases of CV19 the death rate falls again. They have the best heath service in the world and were prepared for this outbreak. They are treating it like wining the World Cup. This big news this week also means the vaccine could well be a one off for the rest of your life and not a new one every year like flu. If scientist know it’s not changing much they know how it will look six months from now so easier to create a vaccine in a shorter term. We still have to make the vaccine though. I’m sure a DNA version will be ready for some by November. It has to be. We may also have a clearer picture on just how many people are infected in a country by data set to come out of South Korea, who does extensive testing. Hopefully it will show that a lot more people are infected with mild symptoms and so death rates much lower. China have jack-booted their cases out completely.