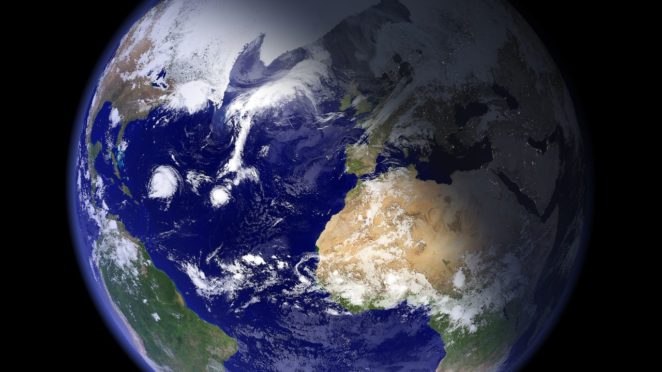 One can see from ancient writings, including the Old and New Testaments, that people in the distant past believed in an Underworld that was a real place. The Ancient Greeks believed that rivers such as the Styx were routes to Hades, and this belief was probably based on the geological phenomenon of rivers disappearing underground in mountainous areas composed of limestone rock, of which there is a considerable amount in Greece!

Underground worlds were graphically portrayed in Dante Alighieri’s poem “Inferno” (the first volume of his “Divine Comedy”), written around 1300. His vision of Hell comprises nine concentric circles or spheres with the ninth, the abode of Satan, being at the centre of the Earth, which must therefore be hollow.

But the remarkable thing is that people in more recent times have also believed that such an arrangement is possible!

John Cleves Symmes was an American who fought against the British in the 1812 war. In 1818 he came up with the idea that there were four concentric spheres inside the Earth, each one being inhabitable. He said that they could be reached via openings at the North and South Poles.

He wanted to mount an expedition to find these worlds from the North Pole, and to establish an American settlement on one of them, to which he assigned the name “Symmzonia”.

Unbelievable as it might seem, his incessant lobbying of the US Congress actually led – in 1828 – to funds being found for a Naval expedition comprising three ships, but fortunately President Andrew Jackson, who was otherwise extremely keen on the expansion of the United States above the Earth’s surface, had enough common sense to realise the folly of seeking to do so underneath it! The expedition therefore never materialized.

In 1868 Cyrus Teed proposed a Hollow Earth concept that literally turned the notion inside out. His idea, which he termed “Koreshan philosophy”, was that the world was indeed hollow but we are actually living on the inside!

He maintained that the Universe was not infinite but consisted of the hollow Earth surrounded by seven shells of different metals, with absolutely nothing beyond that – not even empty space.

At the heart of the hollow was a black counter-Sun that was dotted with bright points of light. The Sun and the planets whizzed around on orbits between the counter-Sun and the inner surface of Earth.

Although this concept must surely strike anyone with half a brain as being utterly loopy, Cyrus Teed managed to get some people to believe in it, and there are rumours that there even some around today!

Raymond Palmer was an editor of science fiction periodicals, notably “Amazing Stories” and “Flying Saucers”. In the latter, in 1957, he broached the idea that flying saucers (which were his own invention) did not come from distant planets but from within Planet Earth.

Although Palmer was not a Nazi sympathizer there were plenty of people who were and who were happy to use Palmer’s ideas to further their cause. Many neo-Nazis wanted to believe that Adolf Hitler and his close associates were still alive and were biding their time until they could re-emerge and continues the “struggle against world Jewry”. The idea that there was a hidden world beneath this one suited their crackpot philosophy down to the ground (and way below it!) – Hitler was down there now, sending out flying saucers on reconnaissance missions.

Miguel Serrano was a Chilean neo-Nazi who was a prominent exponent of “Esoteric Hitlerism”, which combined Nazism with a variety of occult and racial ideologies.

Serrano believed that the Aryans – believed by the Nazis to be a race of supermen from whom Germanic people were descended – had arrived on Earth from another dimension and established a continent at the North Pole called Hyperborea. Unfortunately, some of the Aryans polluted the race by mating with non-Aryans, after which the pure Aryans slid through the polar opening into the hollow Earth, where they were able to maintain their racial purity.

After being defeated in World War II Adolf Hitler escaped by submarine to join the Aryans in their underground city of Agharta.

Incredible as it might sound, there really are people who think that this utter garbage is actually true!