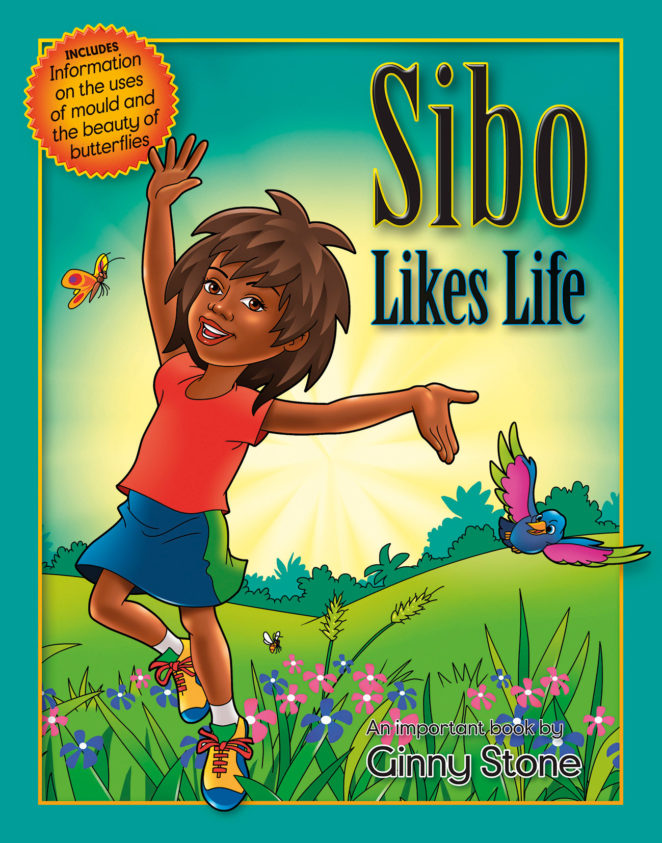 Biodiversity is the name of the game in the highly colourful, full-page illustrated Sibo Likes Life (Lets Look; ISBN 978-1-920340-41-4). Brought out by the prolific children’s author, Ginny Stone, to celebrate 2010 as the International Year of Biodiversity (IYB), Sibo Likes Life sees our intrepid heroine mastering the meaning of the word in all its complexity. First, her sparkly-eyed teacher (oh, and wouldn’t we have enjoyed having one of those at school) tells Sibo’s class the importance of the term, in relation to them later possibly choosing Biology as a subject at school.

Next, Sibo’s father has a great idea, namely so start a litter drive in the park down the road as a community project, despite her Mum’s initial misgivings about the ability of individuals to do much that is significant about the situation. Greatly inspired by her Dad’s enthusiasm for the project, Sibo and her closest friends set out, with their hearts and minds intent on making “a safe haven that we all can share, / And all the birds and insects can frolic without care.” Sibo concludes by thinking that her Dad is right after all: little by little we can all play a part, that is if we’re all willing to make a start (the text is all in rhyme, if you were wondering…).

What is most praiseworthy about Stone’s work is how she makes all topics seem so simple and straightforward, despite (or perhaps because of) her lack of formal academic training at a tertiary level. Not for her the pedantry of the average educator who has everything by the book (page and number), hers is the real stuff of genuine learning in the field and on foot. Compare her position to that held by a barefoot doctor in days of yore, who was much loved and appreciated by the communities with which he was intimately in touch, based on only a minimum of training but extensive personal experience, rather than that held by a highly qualified doctor who has spent years toiling over their books to earn a degree to the tune of great pomp and acclaim. Ginny Stone is, in short, the REAL STUFF of which legends are borne, one step at a time. No wonder she is so totally at home with the subject of this book.

As with her other books in the Sibo series (of which her website https://sibo.co.za/books/ tells all), in addition to the lively, well-written text is the final information page that comes at the end of the book. Stone’s lively presentation of the facts is enchanting in its directness and fluency, with her being able to relate to children and their needs so easily due to her complete lack of stuffiness and pretension. Reaching across cultures and generations, she is an expert communicator of ideas at a key developmental level in their upbringing. If you have tweens of your own, or have them in your charge (whether in a formal or informal setting, such as an after-care centre), do consider acquiring at least one copy of Sibo Likes Life – I guarantee that, by the end of the read, both you and your learners will not only like all forms of life, but love it!

An Interview with Ginny Stone, Author of Sibo Likes Life

Lois Henderson welcomes as our guest Ginny Stone, author of fourteen books in the Sibo series, who leads a hectic home life as a freelance writer and creator of graphic material for kids.

Lois: Good day Ginny, and thanks so much for participating in our interview. Please explain the background to your writing of Sibo Likes Life.

Ginny: 2010 was the International Year of Biodiversity (IYB) – SAASTA (the South African Agency for Science and Technology Awareness, part of the National Research Foundation) commissioned me to write a Sibo book to celebrate the Year.

Lois: Please provide a synopsis of the plot of Sibo Likes Life.

Ginny: Sibo and her friends learn about the word ‘biodiversity’ at school. The teacher’s explanation makes Sibo worried about the environment, but she and her dad come up with a great idea to fix up the local park. Once the entire community becomes involved, the whole street is rewarded with a clean and beautiful space in which to spend time and marvel at nature’s beauty.

Lois: What were your major challenges with writing Sibo Likes Life?

Ginny: Not too many. This is an easy topic to write on. I just had a nail-biting moment whilst I waited for the comments on the story from the two university professors involved. Luckily, they were both positive.

Lois: What were your highlights with your writing of Sibo Likes Life?

Ginny: Thinking that maybe kids might pick up on the idea and have a clean-up in their own areas. Oh… also knowing that 10 000 copies had been sponsored to go to schools didn’t hurt either!

Lois: What has your feedback about the book shown in terms of the impact that it has had on your target audience? Please give concrete examples of such, if possible.

Ginny: Because the books went to SAASTA, and were given out to schools in one of their programmes celebrating the IYB, I never really had the opportunity to read it to kids in workshops or at expos. I do always make it available to read on line when it is the International Day of Biological Diversity (22 May).

Ginny: The Sibo brand went from strength to strength. Also, as a result of writing this book, I was asked to write a series of Easy Science articles in the Mini-Mag (children’s magazine) by SAASTA – from Sibo’s perspective. That was fun, too.

Somewhere around this time, Urban Brew got hold of us and asked if they could use some of the books from the Sibo series on their programme Ntunjambili on SABC1. They did shows for eight or nine of the titles. It’s a cutie programme, and they still have reruns every now and then. It was quite funny, because one time I tuned in and found them reading Sibo in Space in isiXhosa. It was hysterical – I had no idea whether the facts [in the original] had been properly translated or not.

Lois: Thank you so much, Ginny, for granting me this opportunity to interview you. Sibo Likes Life truly shows us how nurturing biodiversity can heighten our own enjoyment of the world. We wish you all the very best with your future Sibo books.