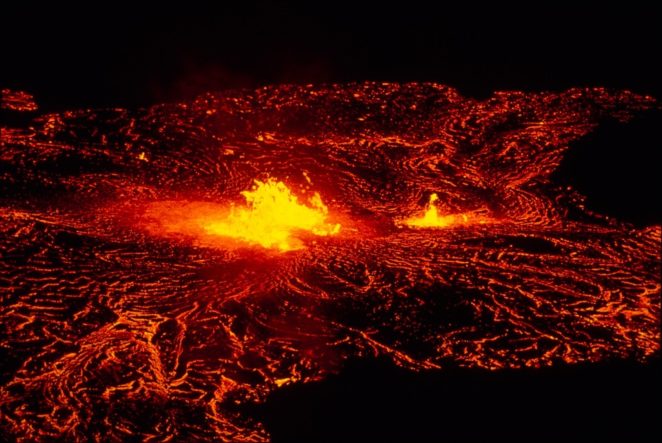 Use of the word “beware” implies that there is some action one can take to avoid the bad consequences of a possible or probable event. However, in the case of the magma blobs the only action that might save one’s skin would be to leave Planet Earth altogether!

Most people are aware of the concept of the “supervolcano”, which could erupt with devastating force and cause millions of deaths. The LakeToba eruption in Indonesia some 75,000 years ago was one such event, as have been the eruptions, over millions of years, that created the Yellowstone Caldera in the United States.

However, these are as nothing compared to what might happen were one of two “magma blobs” that are thought to be deep inside the Earth to become active and send a plume of super-hot material to the surface.

When “ordinary” volcanoes erupt they emit lava that is chemically young. This is because it comes from the upper mantle (beneath the Earth’s crust) where there is constant churning of material – usually at plate margins. However, analysis of lava in Greenland, that erupted 60 million years ago, has shown that it was already very much older than that. This suggests that magma from a much deeper region of the mantle, below the “churn zone”, can sometimes reach the surface.

The fossil record shows that life on Earth periodically goes into reverse, with mass extinctions wiping out the majority of living organisms and evolution having to start again after a long period of time. These events often coincide with dramatic geological events that involve the outpouring of vast amounts of magma over what can be hundreds of thousands or even millions of years. These events often mark the end of geological periods and usher in new ones.

Examples of mass extinctions include the end-Permian extinction of 500 million years ago and the end-Cretaceous extinction that saw off the dinosaurs 66 million years ago. The end-Permian event coincided with the outpouring of magma on a truly vast scale in what is now Siberia, and the end-Cretaceous event also marked the creation of the “Deccan traps” in west central India. The amounts of lava involved are mind-boggling – the lava deposits in India, for example, are two kilometres (1.2 miles) thick. These regions – and there are others in different parts of the world – are known as “large igneous provinces”.

The lava outflows would have been accompanied by constant emissions of toxic volcanic gas that would have completely changed the composition of the atmosphere, thus making life extremely difficult for  most advanced species.

One very interesting fact is that analysis of the rocks in large igneous provinces shows them to be very similar in both composition and chemical age, despite the fact that they were emitted hundreds of millions of years apart. This suggests that they originated in specific regions of the mantle that have not been subjected to churning and mixing.

Some geologists are convinced that the magma blobs responsible for producing large igneous provinces still exist. Not only that, but there is no reason why they may not wake up at some future date and produce yet another lava field and a consequent mass extinction. Planet Earth may indeed become uninhabitable again one day, with man-made climate change having absolutely nothing to do with it.

The bad news is that seismic surveys show that two large magma blobs could indeed exist, these being regions of the mantle that do not fit the pattern of the rest. They lie at a depth of around 2,800 kilometres (1,740 miles), one beneath Africa and the other beneath the Pacific Ocean.