Mount Rainier is located in central Washington a U.S. state on the west coast. This volcanic peak rises up 14,419 feet and is surrounded by pristine forests and alpine scenery. Mount Rainier National Park was established on March 2, 1899, when the 25th U.S. President William McKinley signed the legislation. This was the fifth national park designated by Congress. 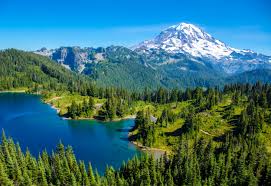 Many years before all this happened the Northwest Native Americans made their home at the base of Mount Rainier. They referred to the mountain as Tacoma and looked upon it as a symbol of power. In 1792 English explorer George Vancouver sailed into Puget Sound and he named the mountain in honor of his friend, Rear Admiral Peter Rainier.Over a century later well-known naturalist John Muir visited this region and recommended that it should be preserved as a park. Muir was very impressed with the lovely wildflowers that grew on Mount Rainier in the warm months. Today the park stretches for 400 square miles around the mountain which is an active volcano.Mount Rainier National Park was one of the first parks to have nature guides, park rangers, a museum, and designated areas that were roadless. There are many natural resources here like glaciers, as well as, many plants and animals. Back in 1899, the park was visited by 200 people but today the number of visitors annually are 2 million.