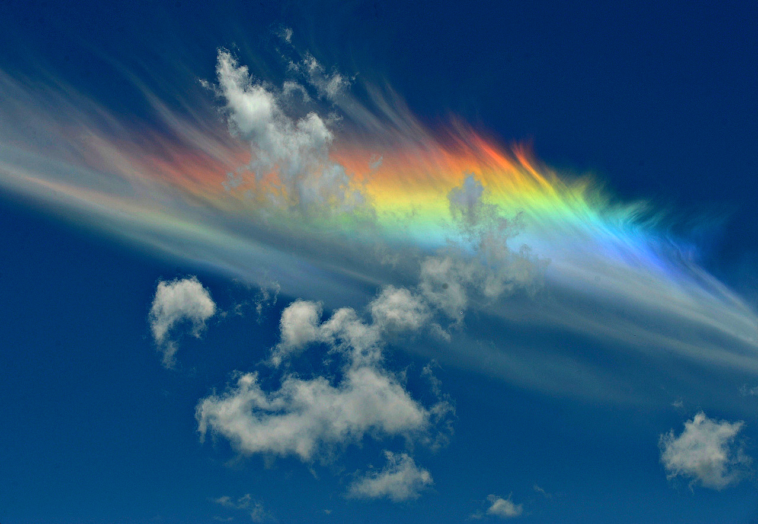 Have you been lucky enough to see a rainbow colored cloud? This rare phenomenon, known as “fire cloud” looks amazing. Despite using this term, there is no rainbow or fire here. Find out what is this and how does it occur!

The scientific name for this  is Circumhorizontal arc. Practically it is an optical illusion.  The sun needs to be a a certain altitude, lighting a certain type of clouds.This is the magic behind this rare weather occurrence.

This occurs when  the sun has risen higher than 58° in the sky. Cirrus clouds are the ones that are thin and found in high altitudes. A that altitude the temperature is so low, that these clouds are practically made of ice crystals.When  the sun is higher than 58°, the light refracts through the plate-like crystals, which act like prisms and create the rainbow. This amazing optical illusion is a rare thing, but when occurred it will certainly leave everyone amazed.

How often a fire rainbow will be seen depends on the conditions. Location and latitude of the observer are the most important factors. And the sun has to be high enough for this to happen. The best place to see a fire rainbow is in a place that has a mid latitude and is close to the equator. You can see many fire rainbows in the United States through the summer, as this it has the perfect location. Northern Europe will have less chance of witnessing this rare phenomenon. The sun is less likely to go high enough.

It will remain in the sky shortly, for about 15 minutes. If you get to see it, then you are really lucky. This stunning phenomenon will spread rainbow colors across the sky.