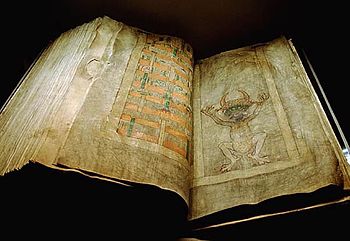 The Codex Gigas is an ancient book that is supposed to contain all human’s knowledge. It is thought to have been written by a monk in the early thirteenth century in what is currently known as the Czech Republic. It contains both text and illustrations and the leaves of the book are made of vellum while the covers are made of wood. The striking feature of the book is the illustration of the devil, which is allocated one page while on the opposite page is the illustration of the heavenly city believed to be The New Jerusalem as depicted in the Book of Revelation in the Christian Bible.

Historians reckon the book was created in the early thirteenth century. As to the authorship of the book, it is not yet known who wrote the book, but one legend story has survived for many centuries to be accepted as the probable answer to the authorship or creator of the book, and the book itself. Whether the legend provides the answer as to the authorship of the book is left to speculations. According to the legend, there was a monk from Benedictine Monastery of Podlažice in Bohemia, which is currently known as the Czech Republic, who broke his monastery vows. His superiors passed the judgment that he was to be walled alive. Since this form of punishment was severe, the monk entered into an agreement with the authorities of the monastery to write a book which will contain all the knowledge known to man in one night. It was agreed. He began writing the book but came to the realization he couldn’t finish the book in one night. He decided to enlist the assistance of Devil. Thus, he sold his soul to Devil who helped the monk to complete the book in that period.

There is another perspective to this story. Some reports state that the monk told his superiors that if they allowed him to write a book that contained all human knowledge in six months, then they would not pass such judgment on him. Nonetheless, as the deadline was approaching, the monk realized he would end up in a prison which is walled on all sides. Thereby, he asked the Devil to help him. In exchange, he offered the Devil his soul.

The Contents of the Book

Does this explain why there is one page dedicated to the Devil? The book is known as the Devil’s Bible because of one single page which contains an illustration of Devil. The debate still rages whether it was the Devil who wrote and illustrated the funny (or scaring) cartoon of himself or the monk did so as a sign of acknowledging Devil’s assistance. The picture of the devil stands at 20 inches long. He is depicted as having a green face with red eyes which are small. In addition, he has two horns, two claws and two tongues which are all in red color, and has worn an ermine loincloth while the rest of the body is naked. He is crouching, probably ready to pounce on someone.

Was This Giant Book Written By The Devil?

On the opposite page is the illustration of the heavenly city. This has quite led to mixed reactions but many people believe the two illustrations act as a warning as to what will befall a person when he decides to follow in the footsteps of Devil, ends up in hell.

Currently, the Devil’s Bible holds the first position as the biggest book in the world. It requires two people to carry the book as it weighs 74 kilograms. Its dimensions are: thirty-six inches long, twenty inches wide and nine inches in thickness. The pages of the book are made of calfskin while the covers are of wood which have been bound together by leather. It is estimated over one hundred and sixty calfskin were used to create the book. It was quite an astounding work of creating a book which is believed to contain all knowledge known to man.

In the manuscript there is a signature which reads ‘Herman the Recluse.’ The word recluse means a person who lives a solitary life. Thus, it indicates the book was written by one person by the name of Herman.

According to a report by National Geographic, Michael Gullieck, a paleographer at the National Library of Sweden where the book is housed noted after investigating the book that the handwriting in the book is uniform indicating the book was written and illustrated by one scribe. Furthermore, as noted by the Daily Mail, “The ink is also made from crushed insect nests, and Gullick claims it is highly unlikely one scribe would use different types of ink.”

Examinations of the book have led to the conclusion it would take an individual five years to complete writing the whole book, that is, text only. If you factor in the whole creation of the book – text, illustration, calfskin pages, wooden cover – the completion time will be twenty-five years.

Another puzzle surrounding the book is the missing pages. Originally, the book contained 320 pages, but throughout the years, depending on who ended up owning the book, ten pages are missing.

The book contains several large and small texts such as: The complete Christian Bible in Latin (New & Old Testaments), War and Antiquities of the Jews by Flavius Josephus, Etymological Encyclopedia by Isidore of Seville, The Chronicles of Bohemia by Cosmas of Prague, medical and exorcism texts including magic formulas. The book is believed to be cursed therefore whoever gets hold of it will be faced with misfortunes as it has also been known to cause disasters and diseases. Despite this myth (or fact), a lot of people from all over the world pay a visit at the National Library of Sweden to have a look at this gigantic mysterious book