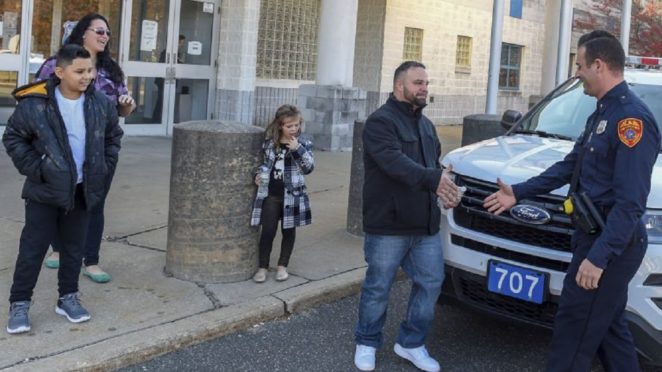 Joseph and Feliece DeMichele were on their way from home with their two children Jayden, 10, and Gianna, 5, to the Village Of Lake Grove to get married when on a Saturday morning they were driving their auto on a highway in Suffolk County in New York when they were involved in a minor accident when a driver in front of them made a U turn and hit their auto which disabled it to get to the town hall on time.

Thanks to the Suffolk County Police Officers Sergeant Thomas Kennedy and Officer Cody Matthews who were on the scene to investigate the auto accident,  Officer Matthews offered the couple and their two children a ride in his auto to take them to the town hall for their wedding ceremony.

The DeMichele’s were so happy that despite a minor traffic accident that could have thrown a monkey wrench into the wedding plans, thanks to Officers Kennedy and Matthews, their wedding ceremony at the town hall was an early Christmas present.