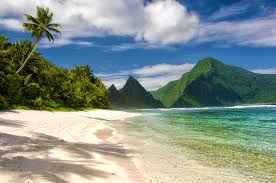 Do you know how the world got coconuts? According to a legend from an island in the Pacific Ocean, it is all down to a blighted love affair between a beautiful girl and an eel!

The island is Savai’i, which is the largest of the Samoan Islands, which lie to the northeast of Fiji. The eel was named Tuifiti and the girl was Sina.

Tuifiti was so attracted to Sina that he spent all his time admiring her. At first she was not too worried about this and caught Tuifiti in a calabash gourd. She fed him every day and he did nothing other than stare at her and grow bigger.

Eventually she realized that this was not a perfect state of affairs. After all, what girl wants to spend all her time being ogled by an enormous eel? It was hardly the sort of love affair that could lead to a happy ending. She therefore decided to ask Tuifiti to go away and stopped feeding him.

Tuifiti was heartbroken by her rejection, but he knew that he could not simply slither back to the sea. Instead he went to the island council and told them that he could not live if he was separated from Sina. He therefore begged them to cut off his head and plant it in front of Sina’s house.

This is what they did, and before long a tree sprouted out of the ground and grew tall and strong. As Tuifiti had promised the councilors, his death would be a permanent blessing to the love of his life. Sina could sew the broad leaves together to make sunshades, and she could drink the liquid inside the fruits when she was thirsty. Every time she made a hole in one and put it to her mouth she would be kissing him.

And that is how the world got coconuts!