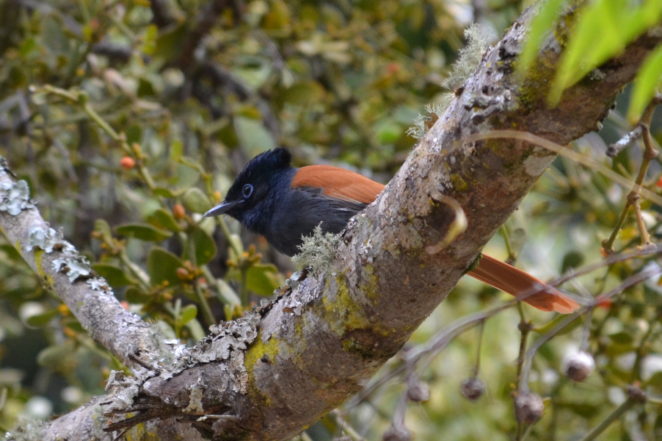 The paradise flycatchers are a genus of bird in the family Monarchidae. The genus ranges across Africa and Asia, as well as a number of islands. A few species are migratory, but the majorities are resident.

The adult male African paradise flycatcher is about 17 cm long, but the very long tail streamers double this. It has a black head, neck and underparts, and chestnut wings and tail. There is a prominent white wing bar. The female has a browner tint to the underparts and lacks the wing bar and tail streamers. Young birds are similar to the female but duller.

The males show considerable variation in plumage in some areas. There is a morph of this species in which the male has the chestnut parts of the plumage replaced by white, and some races have black tail streamers. (SOURCE: Wikipedia)

This bird is very famous here in Kenya. The above photograph was taken by me at the Dedan Kimathi University of Technology Conservancy.