The movie industry must really be running out of new ideas for blockbusters because the new movie “Percy” will be released to theaters on October 9th.  The movie is a based upon the biography of farmer Percy Schmeiser.  The movie was actually premiered at the Quebec Music Festival last week.  This movie must have had a large budget because this movie stars Christopher Walken, Christina Ricci, and Zach Braff.

The movie goes back to 1998 when Schmeiser was sued by the agricultural giant known as Monsanto.  Two decades ago, Monsanto introduced genetically modified (GMO) canola to the farming industry that was resistant to RoundUp weedkiller.  Instead of allowing for farmers to plant whatever canola seeds that they wanted, Monsanto created a scheme that allowed for the company to sue farmers that did not buy their GMO canola seeds.

If a farmer’s field was adjacent to a field that had GMO canola crops, then the seeds for the harvest would cross-pollinate.  Then, Monsanto would inspect the farmer’s field and sue the farmer for patent infringement.  Instead of settling out of court with Monsanto and paying the fine, Schmeiser took Monsanto to court and lost. 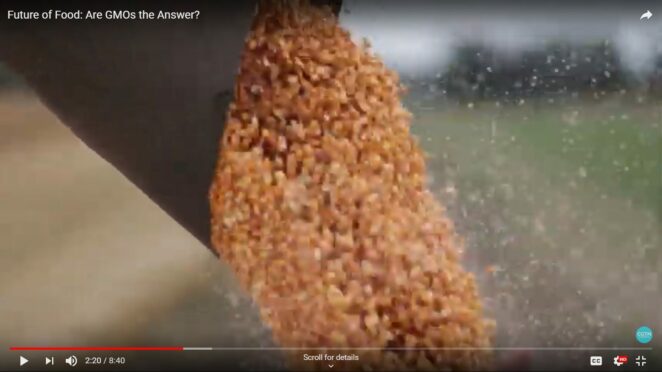 Here is a screenshot from YouTube of corn being harvested.