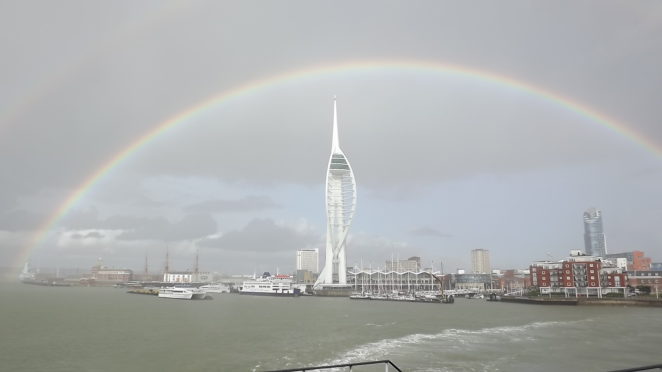 This piece was written as my contribution for the “Hinckley Scribblers” – the writing group to which I belong and at which members read their pieces and get feedback. This week’s theme was “Childhood Memories”.

After my mother’s funeral there was a cup of tea and a bun or two at the back of the church. While we chatted and renewed acquaintances with people we had not seen for a number of years, sometimes decades, a slideshow of thirty or forty old photos was projected in a continuous loop on a blank wall. These brought back a lot of memories, not only of my mother but of other family members.

One of them showed a long table on a stage at which sat a number of people, including a portly, middle-aged man wearing a chain of office, and his wife who was wearing an impressive hat and a somewhat less impressive chain that was a pale imitation of that worn by her husband. At one corner of the photo was a small boy in a sailor suit being directed on to the stage by a large hand on his shoulder.

That small boy was me. I could only have been four or five years old, but I remember the incident very well.

The photo had been taken only a few yards from the wall on which it was being projected. At that time the church held an annual bazaar in the halls just behind the church. This took place over two afternoons, and it was customary for the town mayor, or his deputy, to declare the event open on the first afternoon, which was always mid-week.

The bazaar always had a theme, and in the year in question it was named the Nautical Sale, which is why I was wearing a sailor suit.

My job was to present a large bouquet of flowers to the Lady Mayoress. I was simply told to walk on to the stage and give the flowers to the lady. Unfortunately, I was not told which lady that was, and there were several to choose from. I simply shoved the bouquet at the first lady I saw and ran back to safety as the hall erupted in laughter.

A year or two later I made another appearance on the same stage, but in a very different role. This time the bazaar was the Rainbow Fair, and on the Saturday afternoon the children of the Sunday School put on a short dramatic presentation before the buying and selling began.

My role was that of a grey cloud. I had to run round the stage in the company of a small girl who was dressed as a white cloud. After a few circuits we had to bump into each other and pretend to burst into tears. At this point another young thespian wearing a huge yellow disc appeared, closely followed by seven others, each wearing a different colour of the rainbow.

The costume mistress must have had a wonderful time getting everyone dressed, especially when it came to the kid playing the role of Indigo. I think a lot of crepe paper was used in the production.

Had I gone on in later life to become a famous actor, I would probably have recounted my portrayal of “grey cloud” as the first step on my path to greatness. Things did not quite work out that way, although I did take part in many dramatic productions during my time at school and university. The only claim to fame I can make as a stage performer is that I did once play opposite somebody who went on to achieve a certain amount of fame and fortune as an actor. I knew him as John Marshall but he later changed his name to John Sessions.

Perhaps my early childhood memories did teach me a couple of lessons for what life might throw at me. One of these was that giving expensive gifts to the wrong woman is never a wise move. The other was that crashing into strange women and making them cry is more likely to lead to assault charges than rainbows.