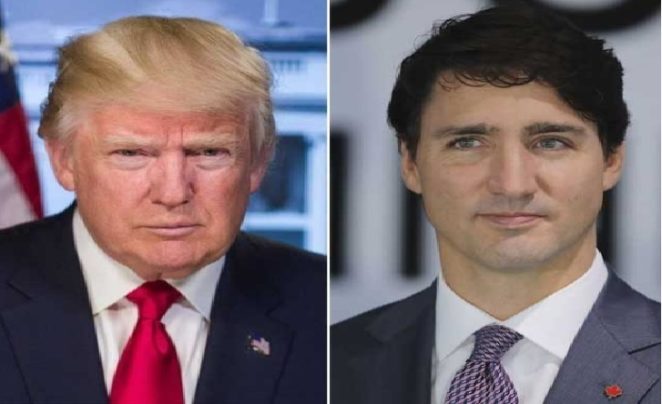 The 44th session of the G-7 countries was held in Canada, including the host, United States, Italy, Germany, France, Japan and the United Kingdom, but the meeting end up US President Trump and Canadian Prime Minister had verbal fight with each other.

In G-7 meeting difference raises on Russia have been resolved to restore suspended membership and trade tariff. During the news conference, Canadian Prime Minister Justin Trudeau said all the G-7 countries agree on a joint communication.

But Donald Trump said the statement of the Canadian Prime Minister’s news conference was a liar, saying that the US would not allow any country to take advantage of the financial benefits. 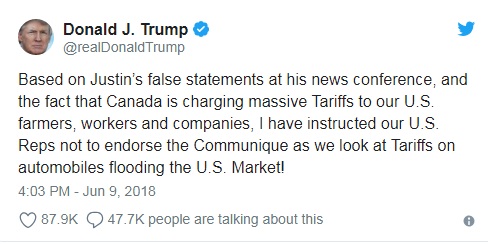 Instead of not being a rationale, only a statement was issued instead of the joint statement of the G-7 conference, which in relation to commercial matters in addition to the relations with Russia and Iran. Before leaving the official end of the Conference US President’s departed for Singapore.

After departure, Trump opened a front against the Canadian Prime Minister and said that Trudeau is a not trustworthy and weak person, we will not allow other countries to lay down tax-exemption tax to American companies and farmers.

President Trump, meeting Kim Jong Un in a Tweet, describes North Korea and the best opportunity to get amazing results around the world, saying that in the event of success in the meeting, Kim Jong un can be invite to United States if meeting goes well.

It is clear that the historic meeting between US President Trump and North Korean leader Kim Jong Un is scheduled for June 12 in Singapore. During the meeting, there is a possibility of eliminating nuclear weapons and softening sanctions.