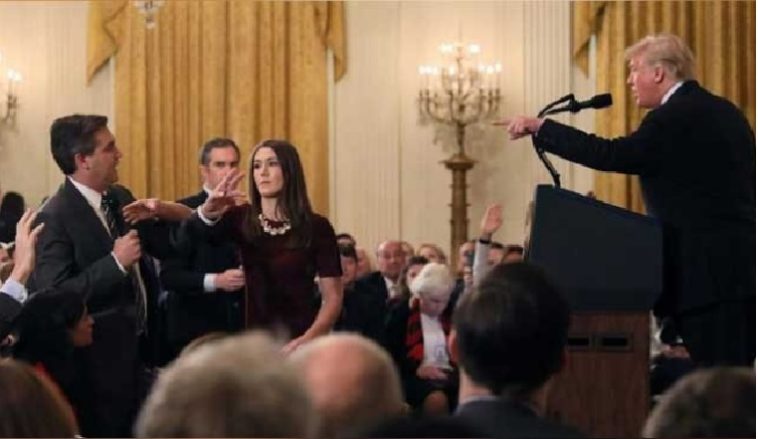 The President Donald Trump was addressing press conference at White House and at same time CNN reporter Jim Acosta questioned him regarding refugees, On which Trump said that he want the refugee not to enter illegally in the US, but legally.

To the credit of Jim Costa he corrected the idea that the migrants were invaders, he tells the President the migrants are hundreds of miles away and no where near the border… But Trump refused to acknowledged the facts, and thats when he exploded with a temper tantrum …

Jim Acosta reminded to trump that he called the refugees convoy to the South American border is direct attack on the US. Jim Acosta said it was not an attack but a convoy of the refugees. On which Trump said he considered it to be a attack over America. Jim acosta wanted to objection again, Trump harshly;y said, “It’s better to let me run the country and you go back to CNN.

The journalist wanted to ask a question again, but US President’s refused in bad mood and indicated to White House’s female volunteer, she went ahead to snatch Mic from Acosta, but could not succeeded since Acosta holded mic very strongly. Then Acosta  asked questions on Russian intervention in American elections, but Trump said it’s just a rumor and nothing else, enough enough, keep Mike.

The Trump said CNN should die with shame that people like you are working in it. You are a Cheap and Evil person.after that Jim Acosta entry has been restricted in white House.