In 1812 when a man named Sam Houston moved to Texas he had already served in the U.S. House of Representatives and had been the Governor of the US state of Tennessee. At this time Texas was part of Mexico. The Anglo settlers from the U.S. were clashing with Mexican authorities. 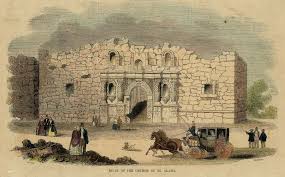 Houston took over as a leader supporting the right to make Texas a separate state and part of the U.S. In 1835 Houston was chosen to be chief of the Texas Army. The Alamo was an 18th century Franciscan Mission located in San Antonio, Texas. It became the site for an important battle to gain independence from Mexico. Unfortunately, a small group of Texans were defeated by Mexican General Santa Anna in 1836. From this came the well-known saying “Don’t forget the Alamo.”

Hearing about this Houston chose to begin a retreat for a month so that everyone could regroup and replenish their strength. The result was that Houston and the Texas Army won a quick battle at San Jacinto against Mexican forces and finally gained independence. After this Houston was elected President of the Republic of Texas. He also went on to serve as a senator and governor after Texas became part of the U.S. in 1845.

Houston died in 1863 in Huntersville, Texas. A large 67-foot tall memorial was erected in his honor for the role he played in gaining independence for Texas.