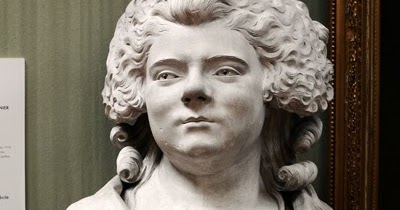 On February 10, 1793, the wife of a man named George-Jacque Danton died giving birth to her fourth child. The infant, a boy, also passed on. At this time her husband was on a military observation mission in Belgium for the Revolutionary Government. It would only be five days later that he found out about his wife’s demise.

Up to the time of the wife’s death George-Jacques had been neglecting her and living it up with mistresses. However, when informed of the tragedy he did become grief-stricken and hurried back to Paris, France. Upon his return he tore his house apart in his unending sorrow that he had been away and that she had died,  It was then that a most bizarre and frightening thought came to him.

He decided that he would have a sculptor create a likeness of his wife, a bust that he could stand before and ask for forgiveness. What he actually wanted was a death mask of her likeness. When he went to a sculptor he was informed that since his wife had been in her grave for the past three days this likeness was not possible.

The death mask was completed and truly resembled the late Madame Danton. Unfortunately, George Jacques did not have long to enjoy the creation because a year later during what was known as the Terror he was executed when revolutionaries turned against him. He was under suspicion of corruption. There was no death mask made of him but his last words to the executioner are famous

:“Show my head to the people. It is worth the trouble.”

George-Jacques would have found pleasure in knowing where the death mask of his wife finally ended up. It can now be found in the Chateau de Vizille, a castle that is a museum dedicated to the arts of the French Revolution,