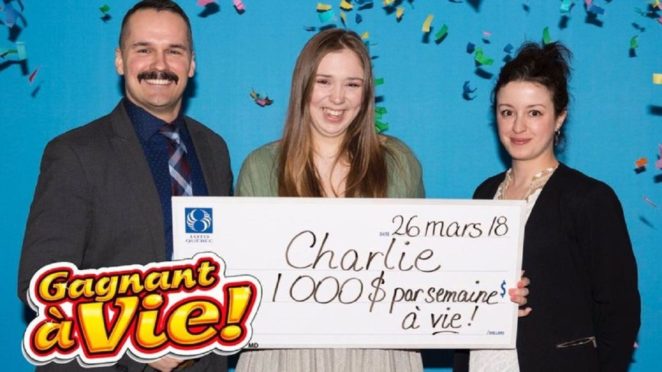 The story of 18 year old Charlie Lagrande has to be the greatest story in the history of anyone who plays the lottery in Canada.

What are the odds that anyone wins the grand prize of $1 million in Canadian money which is equal  to $780,000 in U S Dollars on the first time they played a lottery ticket for the first time? The odds are out of this world.

Charlie celebrated her 18th birthday bought a scratch ticket and a bottle of champagne at a convenience store on her birthday which is March 14.

Talk about having the greatest birthday gift of all time. Charlie won the big prize of $1 million in Canadian money.

Charlie then went to speak to a financial adviser who advised her to take the weekly sum which is $1,000 dollars a week which is tax free.

The $1,000 tax free weekly prize is for the rest of Charlie’s life without paying any taxes means that her salary from winning the Canadian Lottery is around $100,000 annually.

I am hoping that Charlie does enjoy the rest of her life for winning the Grand Prize of the Canadian lottery since she will to deal with fair weather friends and relatives who will be asking her for some of her prize money to get them out of ruts that all of us will go through throughout our lives.