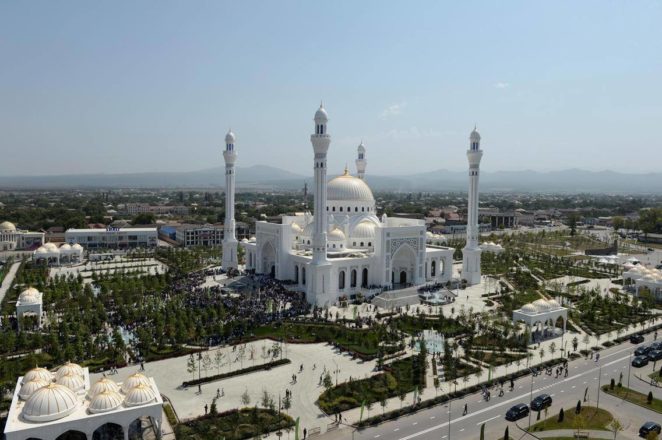 ? mosque in Europe, the Republic of Chechnya, Russia  Recently, after seven years of construction, opened the largest mosque on the European soil, in the town of Sali (near Grozny), in the Russian republic of Chechnya (in particular, one of the areas of Russia that officially located in continental Europe). The mosque, which is called “The pride of the Muslims” (after the Prophet Mohammed), is decorated inside and out with white marble, ornaments made of gold and huge chandeliers Swarovski crystals. Within the mosque complex on its access roads, there are 12 gorgeous oriental style fountain, trees from the Netherlands, as well as 48 types of roses. The inner part of the mosque was made in the Byzantine style. The mosque itself will be able to accommodate 30,000 people, while on its plateau can fit more than 70,000 worshipers, making it the largest such in capacity in Europe. The complex mosque extends to 9.