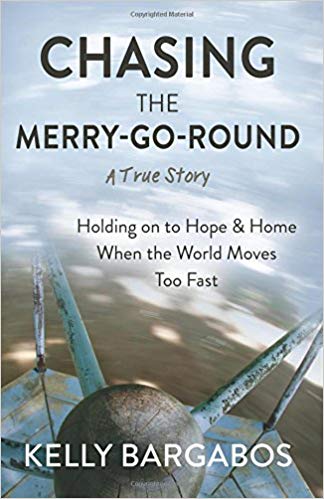 The analogy that Kelly Bargabos uses to describe how detached her adopted brother, Bobby, was from the average thinking and behavior of children of his own age when he was growing up, with him being forced to be an outsider, always looking on, while other, more competitive children were able to savor the thrills and spills of the merry-go-round, reveals the times in which they grew up as being both risky and filled with the imminent threat of danger, despite its ostensible respectability. Counterpoised against such hazard is the loving nature of the Bargabos home, where, once her parents had accepted an apostolic form of Christianity as their raison d’être, relative peace and tranquility reigned. This is the arena into which Bobby, their mentally impaired cousin, is adopted, when his father shows himself unable to contend with a wife who is abusive and neglectful in turn. How Bobby develops from a warm-hearted and responsive little boy into a substance-abusing juvenile delinquent provides the backbone to Saved, the first part of Chasing the Merry-Go-Round: Holding on to Hope & Home When the World Moves Too Fast: A True Story (Boulay Press; ISBN: 978-0-9994234-0-0). How Bobby then evolves through his adult life from being a down-and-out on skid row to a person who is capable of accepting his adult responsibilities comprises the second (Lost) and third (Found) parts of this family memoir, set in the second half of the twentieth century.

Overall, the book is an inspiring and heart-warming read which shows how faith and belief in the intrinsic goodness of self can triumph over the worst odds and how the passage of time, if used correctly, can help facilitate the healing process. That Bargabos herself has challenges of her own, with a marriage that breaks down irrevocably due to the numerous strains under which it is placed, in no way prevents her from remaining solicitous in the extreme to her adopted younger brother—a compulsion that she has from when he first comes into their life. Chasing the Merry-Go-Round is filled not only with anguish, such as when Bobby’s birth mother smiles as she deliberately stumps out her cigarette on Bobby while he sits cradled in her arms, but also with moments of joy, such as when he first arrives in his adopted family’s home, and Kelly realizes that he is safe at last.

The text is supplemented by numerous shots of Bobby, both as a youngster and as he is now. In addition, the Author’s Note at the start of the work explains why Bargabos chose to write about Bobby as she has: “My heart has always been to tell the story of my brother, Bobby, so that people could see what life is truly like for someone like him.” The emotional insights that Chasing the Merry-Go-Round provides are so riveting in their intensity that they are likely to remain with the reader long after he or she has finished reading the book. No small wonder, then, that this dramatic tale of love, loss and redemption comes recommended by the San Diego Writers and Editors Guild, along with having achieved the literary heights of being a semi-finalist in the William Faulkner Creative Writing Competition.