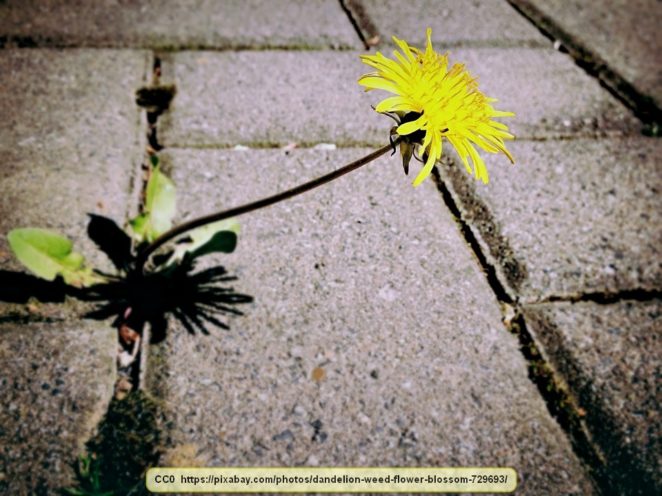 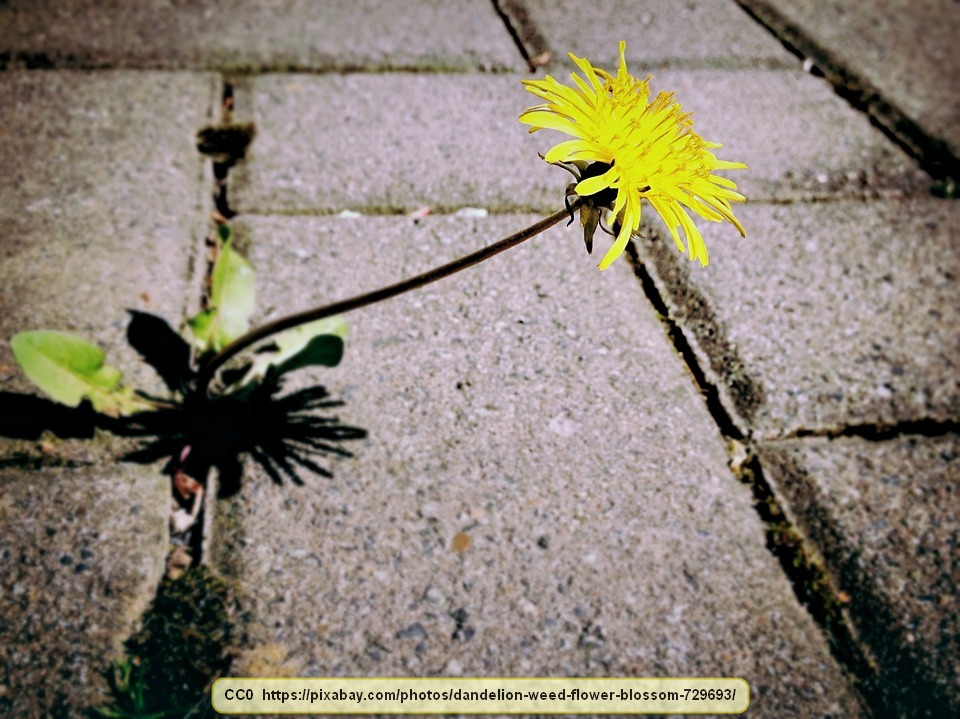 The late naturalist and author, Euell Gibbons, once said that a weed was any plant that grew where you didn’t want it to grow. That essentially true. Still, many people find that from the spring to the fall, they are constantly trying to get rid of weeds. Thankfully, it is simple to make a powerful homemade weed killer that is not only non-toxic, it is also biodegradable.

Weeds, like dandelions, crabgrass, chickweed, mallow, and miner’s lettuce are hardy and resistant to most forms of control. They can even spring up in cracks in sidewalks and road surfaces. Pulling them is not only back-breaking work, but it is also often futile since the weeds often grow back if any of the roots still remain.

People often spend tremendous amounts of money on herbicides every year to control weeds. The problem with these substances is that they are usually toxic, expensive, and very often, they don’t work very well. Additionally, they are often so dangerous that people need to wear gloves and protective gear when applying them. The chemicals then stay in the ground for a long period of time and can prevent desirable plants from growing for weeks, months, or even longer.

The following homemade weed killer has none of these shortcomings. It isn’t expensive, it is easy to make, it isn’t toxic, it is completely natural, it breaks down in a week or so, and it isn’t an environmental hazard. Best of all, this stuff really works.

What is this miracle weed killer? It is simply distilled white vinegar with a small amount of dish soap added.

The mixture is about a tablespoon of dish soap to a pint of vinegar. This can be put into spray bottles to make it easy to apply. The bottle should be set to a stream and the weed leaves should be well-covered with the mixture. The best time to apply the homemade weed killer is when the weeds are actively growing, early on a sunny day.

The weed killer works in two ways. First, the vinegar burns the leaves, especially during a sunny day, because the sun’s rays are focused due to ‘lensing’, sort of like using a magnifying glass. The dish soap is added because this helps the vinegar to adhere to the leaves.

Second, vinegar is quite acidic. Using vinegar lowers the pH of the plant immediately to the point that only acid-loving plants can survive. The weed leaves actually absorb the vinegar. Once this solution reaches the roots, the plants begin to die. This process is rapid. And yet, both dish soap and vinegar begin to break down as soon as they are used. Water and rain speed this along by diluting the mixture, so within a week. the weeds are gone, but the soil is left unharmed.

This does mean that the solution might need to be applied more than once to well-established weeds. However, this is also a very fast acting mixture. I usually start seeing results within a couple of hours. I use it around the church where toxic poisons are not good to use. I also use it around our home.

Most plants prefer pH neutral to slightly alkaline soils, so this weed killer will work on most weeds. Care should be taken not to overspray, though, because it can also kill desirable plants as well.

Note: If you accidentally spray plants that you don’t want to kill, immediately apply a lot of water to the plant. This dilutes the acetic acid in the vinegar and will probably save the plant.

Even with cleaning vinegar, the cost isn’t great. Commercial herbicides like “Round-up” can cost between $15 and $30 per gallon. A gallon of pickling vinegar costs around $2.50 to $3.50 per gallon. Cleaning vinegar costs about $5 per gallon. The dish soap can be the most inexpensive brand on the market, so it will run around 99 cents for a bottle, which should be plenty to mix with two gallons of vinegar. The amount of savings is quite noticeable.

This homemade, non-toxic, biodegradable weed killer is cheaper than pesticides, it is easy to make, it doesn’t leave harmful chemicals behind, and it gets the job done in a hurry. It isn’t harmful to the environment, either. If you have weed problems, this is a good solution (pun intended).