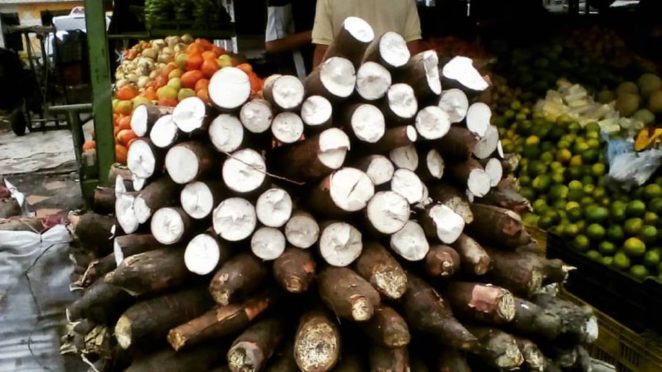 Latin Americans in general and Venezuelans in particular have been fed roots and tubers since time immemorial, food tradition that we inherited from our indigenous ancestors, settlers of the American lands before the arrival of the European conquerors. In addition to wheat bread, relatively new, and arepa, our corn bread, “vegetables”, as roots and tubers are also called in some regions of the country, have been present for centuries in our tables as companions of food that we consume daily. There is a great variety of roots and tubers, but the ones best known to Venezuelans, the ones most commonly used in our basic diet are cassava, potatoes, yams, mapuei and ocumo, among others. But although my favorite is the mapuei, it is from the yucca that I want to deal with briefly in this publication.

The yucca is one of the most popular edible roots of Venezuelans. It is believed that it is native to the region called Amazonia, between the south of the Orinoco and the Amazon River basin. It has two varieties: sweet yucca and bitter yucca. With bitter yucca, cassava bread, known as “casabe”, is prepared through a long process; and as an industrial raw material it is used in the manufacture of glucose and starch. Sweet yucca can be eaten directly: boiled, fried and, although I do not know this way of eating it, I have not eaten it that way, they say that it is also eaten roasted.

In these times of crisis in Venezuela, due to the cost of wheat flour and corn flour for the preparation of bread and arepa, the consumption of roots and tubers has increased considerably because it is easier to obtain and cheaper. There is also more consumption of “casabe”, which as I said is a bread made with bitter yucca through a long ancestral process.

In the same way, cassava, as well as other roots and tubers in our diet, are mixed with corn flour to make a different type of arepa. Due to the same situation of scarcity and increase in the cost of corn flour, the flour mixed with roots and tubers is being consumed more, but this practice is something that has always been done on a smaller scale. I put it into practice many times in the field when I wanted to eat a bread different from the one we ate every day.