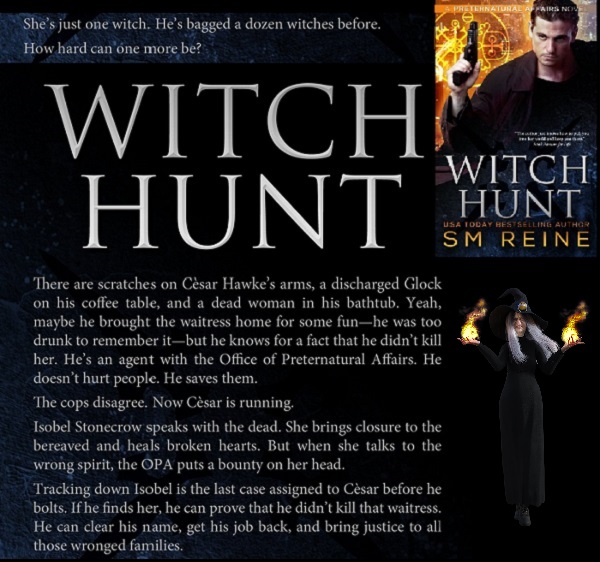 Witch Hunt is a book by S. M. Reine, a female author who has established herself in the modern genre known as urban fantasy.  Prepare yourself for intense reading.

Today in the United States, those who profess to be witches, sorcerers, soothsayers, fortune-tellers (psychics), Satan worshipers, etc., can assert that their rights should be protected under the freedom of religion provisions of the Constitution.  Let’s just say that’s a fact and not a theoretical hypothesis.  Most of us know that, at one time in America, this was not always the case. There was once a time when they were persecuted to the death. Genuine practitioners and people who were falsely accused of practicing the arts were hunted down and mercilessly butchered in the name of … ??? … I have read several historical accounts of the witch-hunts and I am not fully convinced that the “authorized witch hunters” were trying to rid of the world of malevolent evil spirits who could control the minds of others and make them commit acts of harm and injury against their free will.  (It’s what I think.  But I’m no authority on witch hunting.)

SM Reine has established her reputation among readers of urban fantasy by becoming a bestselling author.  She is currently writing a series grouped under the label “Preternatural Affairs” and the first book in this set is titled “Witch Hunt”.  Cèsar Hawke is an investigator for a secret government agency that was established to police witches and demons.  A secret government agency … ??? Um … Hello!  It’s fiction!!!