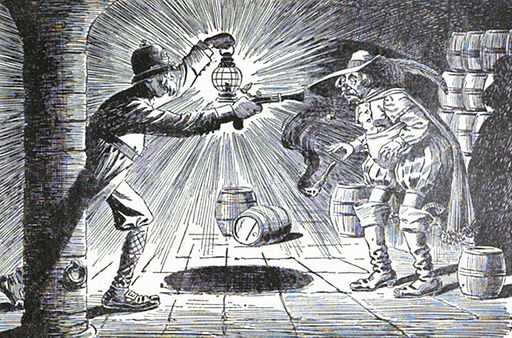 Guy was quite enjoying his new job as a courier driver in London. He had only been doing the job for a week, but he found it quite exciting trundling his horse and cart around parts of London that were new to him, having only arrived from the country a month or so before. He had met lots ofnew people and had already earned several groats in tips from satisfied customers.

On the 5th of November he got a message that he was to go to Eddie Towbar’s distribution depot in east London. He was told that he only needed to bring his horse because the wagon was already loaded and ready to go.

He was greeted by the depot foreman when he arrived.

“OK, Spoons, your job is to deliver a wagonload of beer to the King’s Arms in Westminster. There are two carts out in the yard, both loaded with barrels, eleven of them on each. One cart is red and the other one is green. You want to hitch your horse to the red cart. Whatever you do, don’t take the green cart.”

The foreman’s assistant laughed out loud at this.

“Oh no”, he said, “you wouldn’t want to take the green cart. That would be a huge mistake.”

“It certainly would”, said the foreman. “An enormous mistake”. The two men carried on laughing as Guy made his way out to where the two carts were waiting.

So Guy hitched up the cart and set off through the streets of London.

When Guy reached the King’s Arms he had to ask for directions as to where he would find the entrance to the cellars, which he presumed were somewhere round the back. The landlord explained that it was a bit complicated, because several roads had been cordoned off on account of the huge procession that was expected very soon.

“It’s the state opening of Parliament”, said the landlord. “King James will be arriving, as will all the Members of Parliament, and security is understandably tight. Mind you, there’ll be lots of celebrating afterwards, which is why I’ve ordered all this extra beer.”

“Oh yes, definitely green. Don’t go delivering my beer down anyone else’s hatch, painted any other colour, or my party definitely won’t go with a bang tonight!”

“How do you want me to stack your barrels?” asked Guy.

“There are several bays in the cellar”, said the landlord, “just go to the one at the far end and stack them up there.”

Guy was about to set off with his cart when the landlord spoke to him again.

“Oh, just one thing,” he said. “Because of the royal procession there’s every chance that the roads will be completely blocked by the time you finish. I suggest that you stay down there with the barrels until the coast is clear. I’ll send one of my barmaids down with some food and plenty of candles, and I’ll make sure that you get a decent tip at the end of it all. You can rest assured that you’ll get much more than you were expecting.”

“That’s right. There are some red hatches in the neighbourhood, but only one green one. You wouldn’t want to deliver my beer down a red hatch!”

So off Guy trundled off with his cart and made his way along the route he had been told.

“Left, right, left” he said to himself. “Now where’s the green hatch? Ah. There it is.”

He did wonder a bit why the cellar entrance appeared to be out of sight of the King’s Arms, but when he opened the hatch and looked inside he could see that a tunnel ran away into the distance, so it could easily, he thought, run underneath the pub.

Getting the barrels down the ramp into the cellar was easy enough, as was rolling them down the tunnel, which was lit with lanterns all the way along. It took some time, but eventually Guy was able to stack the eleventh and last barrel in the bay that was furthest from the entrance hatch.

There was plenty of noise coming from above his head – lots of shouting and sounds of many feet marching up and down. Maybe they were getting ready for the big party, which had to mean that somebody would be coming for the beer before too long. All he had to do was sit still and wait –at least the barmaid with the food should turn up soon.

After a short time there was a loud noise from the other end of the tunnel. There were bright lights and men tramping along the passageway. A troop of soldiers, armed with muskets, walked into the bay where Guy was sitting.

“Stand up”, a loud voice commanded. “You are under arrest for being right underneath the House of Lords surrounded by what look suspiciously like barrels of gunpowder. Put your hands where I can see them!”

Guy did exactly as he was told. It seemed to be the best plan, given that a dozen muskets were pointing at his face.

“What’s your name?” barked the sergeant in charge of the troop. Guy should probably have been completely open at this point, but for some reason he thought that subterfuge might be a good idea.

“Forks”, he said, this being the only name he could think of that wasn’t Spoons. “Guy Forks”.

“How do you spell that?” asked the corporal who was taking notes of the proceedings.

“How the hell should I know?”, said Guy. “I never went to school. Write it how it sounds.”

So that is what the corporal did. And that is how the legend of Guy Fawkes was born. It was all down to the fact that the man who was supposed to deliver a load of beer for a celebration night at the King’s Arms suffered from red/green colour blindness and had a problem telling left from right. He simply delivered the wrong barrels to the wrong place – nothing more than that.

You see, there never was an actual Gunpowder Plot. All those stories about plotters being hanged, drawn and quartered were put about by the propaganda machine of the time to cover up the huge embarrassment of what really happened.

I refer, of course, to the terrible mistake made by the Royal Horse Artillery when they tried to fire a 21-gun salute for the King having primed each cannon with half a barrel of best bitter.