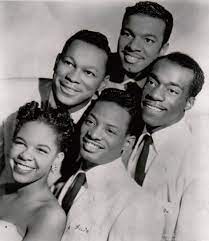 One of the most successful American vocal groups in the early rock and roll era. They had a new and unique sound. The Platters had 40 singles on the Billboard Hot 100 chat between 1955 and 1967 as well as four number one hits. The group came together in Los Angeles, California in 1953 and the original members were Alex Hodge, Cornell Gunter, David Lynch, Joe Jefferson, Gaynel Hodge and Herb Reed.

The Platters scored big with the hit “Only You” which came out in 1955 and was their first Top Ten hit on the pop charts and stayed on the R&B charts for seven weeks. Next came “The Great Pretender” and became a number one national hit. The group appeared in the movie Rock Around the Clock where they performed both of these songs. The hits kept on coming with “I’m Sorry”, “He’s Mine”, “Enchanted”, and “The Magic Touch”.

The Platters also discovered that they could do well by updating older standards such as “My Prayer”, “Twilight Time”, “Harbor Lights”, “To Each His Own”, “If I Didn’t Care” and “Smoke Gets in Your Eyes”. They were inducted into the Rock and Roll Hall of Fame in 1990 and the Vocal Group Hall of Fame in 1998. The Platters were the only group to have three of their songs included in the soundtrack of American Graffiti.