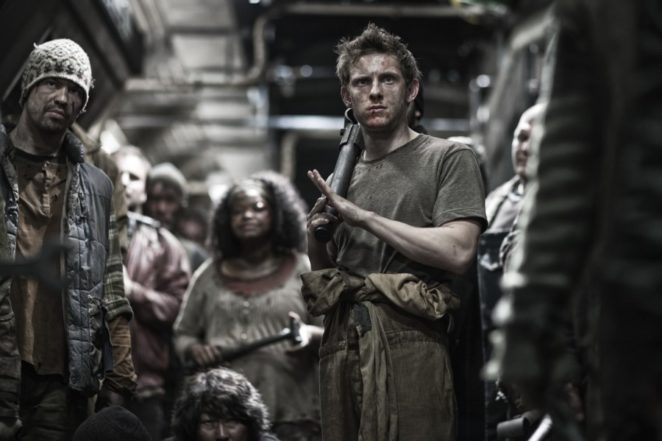 Snowpiercer is exactly the type of good film we are no longer hearing about, let alone seeing. When Blockbusters finally closed down in 2013 you could no longer rent high street movies, of course, but that valuable library and shop window of current and recent releases also went. Apart from some local libraries that still rent DVD most people really have no idea what films are out there today other than the big budget ones we see on TV adverts. It’s not surprise they are most of Hollywood’s profits now and why they make more and more of them. Because of that limited visibility Snowpiercer’s well spent $40 million from exciting Korean director Bong Joon – ho has dragged back just $85 million.

The film is based on the French graphic novel “Le Transperceneige” and has strong steam punk look. Its cracking cast suggest they like the director and wanted to be around this guy. If you don’t know him he did Korean films Okja, Mother and The Host, to name but three, and spearheading the Asian Extreme cinema drive to be top dogs down there.

In 2014 and an attempt was made to counteract global warming through climate engineering in the higher stratosphere by dispersing something called CW-7. But it backfires catastrophically, causing an ice age that kills all human life on Earth, except the inhabitants of the Snowpiercer, a metallic silver 600m long train powered by a mystical perpetual motion engine that travels a circumnavigational track of the earth every year, created by the mysterious Wilford, a sort of Steve Jobs character. The train never stops and so no one ever gets off and so no one to get on.

By 2031 a class structure has inevitably formed on the train as the elites inhabit the increasingly extravagant front cars while the “scum” fester in the tail in squalid and tough conditions, living of putrid tasting protein bars and the hope of a revolution, six put down so far.

Under watch by Wilford’s menacing arms guards, they are kept in their place in the social order by Minister Mason (Tilda Swinton) and sturdy carriage doors. Young kids are often ripped from their mothers to never be seen again whilst other passenger suffer brutal torture for rebelling. But it’s time to try and take the train once again as leader of men Curtis Everett (Chris Evans), conspiring with his mentor Gilliam (John Hurt) and second-in-command Edgar(Jamie Bell), plans to lead a revolt all the way up to the engine.

During the next feed they make their move, banking on the feeling the guards ran out of bullets years ago. Curtis Prediction proves right and they overpower the guards and begin to move down the train. The plan is to spring security expert Namgoong Minsu (Kang-ho Song) and his clairvoyant daughter Yona (Ko Asung) from the prison car so he can disable the locks between cars, offering them a hallucinogenic drug called Kronole as payment. After a scuffle he reluctantly agrees.

They take the next car where they discover that insects are ground up to make their protein bars, and Gilliam suggests that if they take the subsequent water supply car, they will control any negotiation with Wilford to control the train. But when the next door is opened they meet their match, hoards of masked men with hatchets led by Franco the Elder (Vlad Ivanov). Under Mason’s orders they attack. This is not going to be easy.

It’s good grim fun folks and with echoes of classic Steam Punk Sci-Fi providence like Brazil and The Double it looks great, considering the 2 hour movie is all, bar 6 minutes, shot inside a claustrophobic train. Chris Evans is unrecognizable in the lead covered in grime whereas Jamie Bell’s screen presence remains very Billy Elliot. Tilda Swinton, of course is eccentric brilliance in everything she does and no different here, incredible fun as the gruff Northern English woman tasked to keep control of the lower orders. The avuncular John Hurt in one of his last film performances plays himself, as does Ed Harris. This is Swanton’s movie by a mile.

It’s an action movie with an intelligent edge and some solid scripting. With John Hurts wise old presence you always get that. It’s a bizarre mix of comedy, thrills and gratuitous violence, like when a man has his arm ‘frozen off’ as torture. It’s kind of like The League of Gentleman on a train at points, if you excuse the pun. But it never leaves the rails on ideas and constantly engaging as the riff raff move up the train towards the affluent crowd nearer the front. Obviously it is some sort of statement on the capitalist class system over an action movie but it’s clever enough to appeal to a smarter audience. What a great idea in the first place that the last remaining humans would be whizzing around the Earth on train forever more.

The Times –‘Snowpiercer is a fantastic dumb movie for smart people’.

Toronto Star –‘You couldn’t ask for a better metaphor for hell on Earth than what Bong Joon-ho has wrought with Snowpiercer: constant forward momentum while getting absolutely nowhere, suffering all the while’.

Wall Street Journal –‘Once Mr. Bong sets his monorail in motion the movie assumes an irresistible momentum, accelerated by nonstop mayhem, gallows humor and an immersive visual style that possesses a heady sense of the steam-punk Apocalypse’.

The Age –‘Violence always involves moral questions, and the decision whether to take up armed struggle lies at the heart of revolutionary movements, but the film does not take these concerns at all seriously’.

New Statesman –‘It is far from flawless — there are too many longeurs and lapses of logic that impeded its progress along the way — but it is alive with ideas and imagination which see it across the occasional piece of imperfect track’.