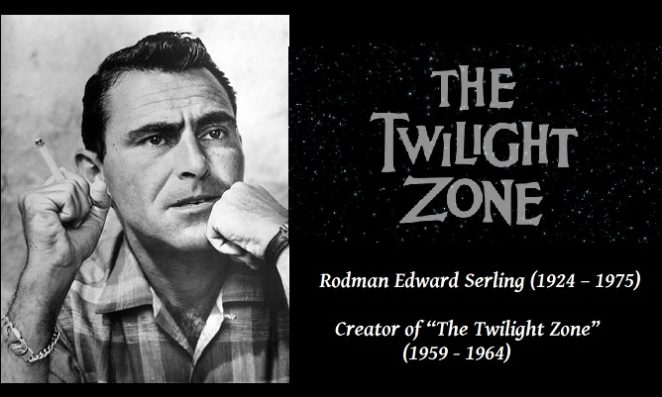 “The Twilight Zone” was a popular TV series that aired from 1959 to 1964.  It was hosted/narrated by its creator Rod Serling.  The man was a genius!!  I scoured Twitter to see what kinds of tidbits I could find either about him or the series.  Twitter was loaded with gems!  I had no idea that Mr. Serling was born on Christmas day.  He lived a very short life:  50 years.  Rodman Edward Serling (1924 – 1975).  Even though this TV program only lasted for 5 years it left an indelible mark in the history of science fiction entertainment.  People have tried to recreate or remake this classic series.  But I’m sorry.  The magic was the man himself.  It was his creative and imaginative thought process that was magical.  Those who try to recreate this show just can’t match the ideas he came up with.  He was one of a kind.  There will never be another Rod Serling.  Enjoy the tweets!

He lived for just 50 years, but his gift to all of us is timeless. pic.twitter.com/XsS4h7uyDK

“It has forever been thus: So long as men write what they think, then all of the other freedoms – all of them – may remain intact. And it is then that writing becomes a weapon of truth, an article of faith, an act of courage.” – Narrator of The #TwilightZone, Rod Serling pic.twitter.com/koIJ7gVm4w

The #TwilightZone debuted on CBS this date in 1959, hosted by #RodSerling. It ran for 5 years. pic.twitter.com/zoTmd1DMzX

Sometimes it feels like we're living in The #TwilightZone. What's your most memorable episode? pic.twitter.com/oVKdVkO2BX

“Terrors from The Twilight Zone” was a recurring feature in the excellent but short-lived, contemporary magazine Fantastic Monsters of the Films (1962-1963). TZ featured in the first, second, and seventh (final) issues. #TwilightZone #FantasticMonsters #horror #sciencefiction pic.twitter.com/WPnnybemoK

Illustration by Stephen Gammell for “The Girl Who Stood on a Grave” by Alvin Schwartz (Scary Stories to Tell in the Dark, 1981). This well-known folk tale was adapted on The Twilight Zone as “The Grave” by writer/director Montgomery Pittman. #TwilightZone #Folklore #horrorart pic.twitter.com/wqDxHqCxnz