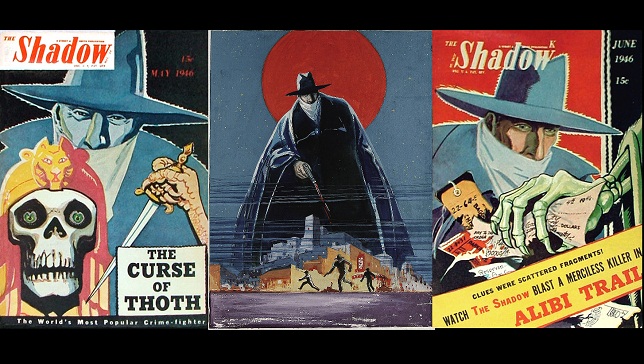 Sort of feeling a nostalgia vibe.  The older I get, the more I feel this vibe.  The Internet is so wonderful.  Because usually when I get this feeling I can search the web and find my memories.  Some of my memories are clear but some are really faded.  For example, I know there was a TV series called “The Shadow”.  But my memory of the episodes are kind of blurred.  I know that in the 90s they attempted to remake “The Shadow” casting Alec Baldwin as the main character.  Even though I’m a Baldwin fan, I never watched that particular film.  View the Official Trailer.

I was able to find some cool tweets though  “The Shadow” wasn’t just a television show.  This memorable character was shared with the public through various media.  It was first published as a series of novels.  Then it was a radio program.  It was in pulp magazines and comic books.  It was also a comic strip.  In addition to being a television series, several movies were made.  Last but not least, “The Shadow” is a video game.

"Who knows what evil lurks in the hearts of men? The Shadow knows!," #Theshadow https://t.co/F7Mr7yp7Qt

Orson Welles played Lamont Cranston/The Shadow in the first season of #TheShadow radio show. He was in 52 episodes from September 1937 to September 1938. pic.twitter.com/qF4yZytI8D

A Thread??On July 1, 1994, Universal Pictures released #TheShadow in US theaters. Directed by Russell Mulcahy and starring #AlecBaldwin, #JohnLone, & #PenelopeAnnMiller, this action adventure film was based on the mysterious radio, pulp, and comic hero. pic.twitter.com/FqrabhTo41