Solitary Man is a film that will hit home for successful, attractive and older men, especially for men whose success and confidence came from mostly having those looks. At thirty all the girls look and you can touch, at forty you can look and not so much touch but at fifty you can’t touch and you can’t look and the pretty girls just see a fifty-year-old letch if you do look. You are the same guy but you are just older and that makes all the difference. It’s depressing.  Age creeps up on you, whoever you are, and you are suddenly a greater threat to women, a potential creep or a child abductor as moms clutch their kids hand that little bit harder.. Star Michael Douglas may not have all those issues in life but absolutely perfect for this role.

The film draws from the Neil Diamond song of the same name and Douglas dressed in black like the singer throughout the film, Johnny Cash style. Very experienced Director Brian Koppleman (Runaway Jury, Michael Clayton and Oceans 13…) delivers Douglas as a big shot car salesman who has to try and deal with a rapid decent in his life but try and hold onto his dignity at the same time. The film does mirrors Douglas career in some ways as he paired up with sexy and much younger Welsh actress Catherine Zita Jones and admits to a sex addiction. Hollywood skews things and tells us younger women are gagging for much older men. The reality is the exact opposite.

54-year-old and extremely vain Ben Kalmen (Michael Douglas) is an attractive and very successful car dealer in the New York area. It all comes to him when he opens his mouth and deploys the charm .At his annual medical check-up the doctor has some bad news.A scan is required to check his heart. It’s time for Ben to slow down.

We flash forward six years to see if Ben did take his foot off the gas and de-stress. His fortune has drastically changed. He is taking oral medications but never got the prescribed heart tests in hospital, complete denial on the health side and losing his sense of “immortality” sending him on a self-destructive mid life crisis. He bullsh*ts too much, chases young girls, now divorced from ex wife Nancy Kalmen (Susan Sarandon), because of, and made reckless business decisions that nearly put him in jail. He is flat broke, borrowing money from his daughter Susan (Jenna Fischer), and still unwilling to accept his age and hates being called dad or granddad.

Ben accompanies Allyson (Imogen Poots), the beautiful 18-year-old daughter of his current girlfriend Jordan Karsch (Mary-Louise Parker), to her college interview at a Boston campus where Ben studied as a kid and a prominent donor during his more prosperous days because of, even having a building named after him. On campus, Ben meets an impressionable gauche student named Daniel (Jesse Eisenberg) who appreciates Ben’s wisdom and advice, and his way with the ladies. Ben’s ego is boosted by that attention and later that night Ben and Allyson sleep together, Ally also drawn in by his charisma.

Back in New York, Ben’s ego accelerates some more and wants to continue the relationship, which Allyson dismisses as a onetime experiment with an older man, in her words, crossing “the Daddy” fantasy off her “list”.  Accusations fly and Ben loses funding to open a new auto dealership, his rent overdue and his daughter Susan cruelly telling him he is no longer welcome in her family’s life. Will grounding wise words from his old college friend, Jimmy Merino (Danny DeVito), who still works in the same campus greasy spoon, put him back on track? 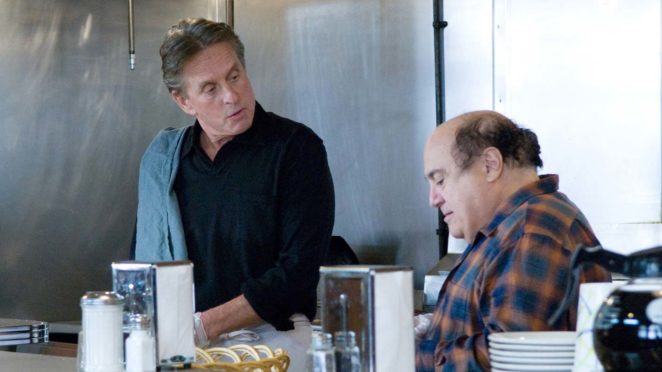 Not sure if I was going to like this but you rarely see a bad movie with Michael Douglas in it and same again here. He is so interesting on screen you can’t take your eyes off him. That’s slow deliberate delivery and those piercing blue eyes and arrogant stare just hit you and he bangs out another performance here. The looks are going and Michael looking more and more like his dad Kirk did as he got old and so naturally the movie roles have narrowed down and dried up some, why he is perfect casting for this well written and witty tale of the mid life crisis.

Jessie Eisenberg is underused here although this film is from 2009, just six years after he exploded on to the screen in the quite brilliant but rarely seen Roger Dodger, a movie on similar themes. Danny DeVito gets his chunkiest role for a while and a lifelong friend of Michael Douglas. Susan Sarandon and Mary Louise – Parker also boost up a cracking cast, completed by our very own and beautiful English Rose Imogen Poots.

For all its class nobody saw it and its $18 million budget (spent mostly on that cast) pulled back just $6 million dollars. Hollywood is unique that way in business in that it pretty much makes the movie first and worries about profits last. I guess Michael Douglas is no longer a pull now he has lost those looks but if you want to e reminded of his talent there are few little movies knocking around from the last ten years where he is very good, this intelligent, well acted comedy one of them…