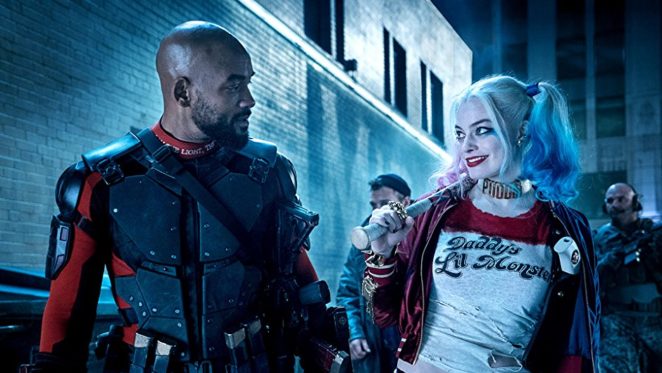 So Suicide Squad, another one of the big DC comic book action movies that was panned by many in 2016, Batman V Superman also coming under fire in the same stable by the fan boys and critics. It’s fair to say DC Comics is not as popular as Marvel Comics when it comes to the movies. But when you actually watch the films destroyed by critics they are not that bad and fairly entertaining, certainly the case with Suicide Squad. I also enjoyed Batman v Superman.It’s from director David Ayer (Training Day, End of Watch, Fury…) and his first real sortie into comic book territory. The big eye opener here is Will Smith as a co-star as Margot Robbie steals the show as Harley Quinn. It’s strange to see Will so glum. His A-List status has all but gone. Looks like Eddie Murphy all over again. His Oscar chasing antics with the tedious issue movie Concussion and then the eccentric Collateral Beauty and nepotistic After Earth have not helped his career.

In the aftermath of Superman’s death, intelligence officer Amanda Waller (Viola Davis) assembles Task Force X, a highly secretive black operation, a team of dangerous criminals with special skills, currently incarcerated at Belle Reve Prison, pulled together for the good of mankind. The unwilling team consists of elite hitman Deadshot (Will Smith), lethal with any kind of firearm, former psychiatrist and now sociopathic sexy pigtailed Harley Quinn (Margot Robbie), pyrokinetic ex-gangster El Diablo(Jay Hernandez ), thief Captain Boomerang(Jai Courtney), genetic mutation Killer Croc(Jai Courtney), and specialized assassin Slipknot (Adam Beach).They are placed under command of Colonel Rick Flag (Joel Kinnaman) to be used as ‘disposable assets’ in high-risk missions for the United States government, hence the Suicide squad tag. To make sure they don’t leg it when out of prison they have a nano bomb implanted in their necks. If they survive the mission and play ball they get ten years of their sentences. If they try to escape then boom!One of Waller’s intended recruits is Flag’s girlfriend Dr. June Moone, an archaeologist possessed by a witch known as the “Enchantress”(Cara Delevingne). Enchantress appears to be working for Waller and the US government but quickly turns on them and decides to eradicate humankind with a mystical weapon in vengeance for imprisoning her. She attacks Midway City with her superpowers and begins to transform its population into a horde of monsters, and summons her brother Incubus (Alain Chanoine) to assist in the mayhem.This will be the Suicide Squads fist mission as Waller then deploys the squad to extract a high-profile mark from Midway, which is reported to be under a terrorist attack.

Harley’s homicidal lover Joker (Jared Leto) finds out about her predicament and sets about trying to release her. But first the Squad has to deal with the Enchantress as Midway begins to fall, one of the squad’s bombs detonated by Flag to show them they are serious.

Its $175 million dollar budget did great money, considering the nasty critics, pulling $746 million back, one of DCs biggest hits of the decade. Batman set them up to dominate the genre but not much success since the late 1990s as X Men from Marvel took back control. I hope the keep going with Suicide Squad as it has the potential to go into some interesting places and adventures.I enjoyed it enough and although a little po-faced in that DC way at times it also has more humour than normal for them this time. It’s kind of the Ghostbusters plot for the second half of the movie and some solid special effects and characters to enjoy. Slightly odd seeing Will Smith playing third fiddle as the ensemble cast swallow him up on screen and loved Jared Leto’s creepy Joker. Apparently he was a bit of a joker on set and creeped a few of the actors out with his vulgar antics, including putting condoms in the catering truck meals and sending Robbie a rat in a box. Aussie Margo also likes to party hard and pranked back with a tattoo gun and some vodka.I would say this is suitable for older kids and a good fun for adults not or young kids. It has adult themes and grown up jokes. What it doesn’t have is that wow factor the Marvel films have. I don’t know why that is but they need to get it back. I would try another studio guys. Batman Begins was brilliant with Christian Bale and game changer but they let it slip away. I’m pleased the pseudo feminist Wonder Woman did so well with the sexy Gail Gadot but the critics and fanboys clearly have it in for DC Comics. The next Avengers movie and Deadpool 2 will kill DC this year.

Saloon.com –‘Based on the screening I attended, I can attest that audiences seemed to genuinely enjoy the jokes and get swept up in the action sequences’.

New Yorker –‘To say that the movie loses the plot would not be strictly accurate, for that would imply that there was a plot to lose’.

Times UK –‘The B-list superheroes have been unleashed upon the world, with their very own cult B-movie, and it’s quite a lot of fun’.Little White Lies –‘One of the more refreshingly uncomplicated summer blockbusters in recent memory’.

The Mail –‘Suicide Squad simply shouldn’t be a movie about saving the world like every other superhero movie; the characters are far too interesting and entertaining to be stuck in something so cliché’.

The NY Post –‘While it’s not perfect, Suicide Squad is very good and definitely worth catching… It’s a film with confidence and swagger, a film in which the sharpness of its dialogue is matched only by the coolness of its (very loud) soundtrack’.