Bad Times at the El Royale is from young director Drew Goddard, he of the brilliant and highly recommended Cabin in the Woods, back with his second movie to date and a sort of stylish Tarantino period style film noir, set in 1960s America. His $30 million budget movie dragged just $31 million back after 18 months and so didn’t quite hit the mark this time but remains a director to watch.

The El Royale motel featured in the movie is based on the famous Cal Neva Resort and Casino that was once owned by Frank Sinatra, exclusive hang out for the rich and famous, including the Kennedy’s and some of Sinatra’s more salubrious friends.

On a warm summers day in the Mid West in 1959 various characters arrive at an almost deserted and extremely stylish motel on the border of California and Nevada, quite literally, the state line passing though the middle of the lobby. It was once a bustling hangout for the rich and famous but lost its gambling license and so now just another motel on Route 66.

Pretty and back backing singer Darlene Sweet (Cynthia Erivo) has a recording gig in town and ready for bed, our third guest. Our final motel guest is the rather cocky Emily Summerspring (Dakota Johnson), young and nervous hotel clerk Miles (Lewis Pullman) having to keep them all happy in a motel that clearly holds some foreboding secrets.

It turns out Sullivan is no salesman and there undercover, an FBI Agent working on a mysterious case, soon snooping around the motel where he stumbles on a secret passageway that runs behind double-sided mirrors for all of the rooms. Whoever owns this motel has sinister intentions.

Through those mirrors the FBI agent can see the priest pulling up his floorboards, the backing singer practicing her Motown numbers and, more worryingly, Summerspring dragging a younger woman from her car boot and tying her up in the motel room, Rose (Cailee Spaeny), that woman. Whatever the FBI agent is investigating there are plenty of crimes going on.

As the characters fill it their backgrounds in the hotel bar, things rapidly go downhill when their true intentions are revealed , and with the arrival of Billy Lee (Chris Hemsworth) and his goons, who seems to know Rose and the woman tying her to things. 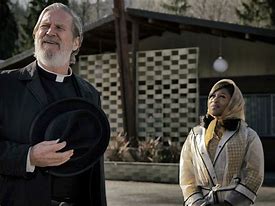 I enjoyed it to a point as the mystery unfolded around the characters backgrounds and their intentions. The look is Tarantino but the dialect more Elmore Leonard as the actors play to pretty much movie typecast, the sassy black girl, John Hamm doing his Mad Men thing and the always brilliant Jeff Bridges being a little bit naughtier in this one. It’s not quite crime noir but on the way there. For all the mystery thriller style it lacked real substance.

The deviant mystery of the motel is somewhat lost after halfway as actions are explained and the arrival of Liam Hemsworth makes the film more about violence and attractive people hitting each other with things than the stylish film it was. It would have been nicer to have had more back-story on the motel to beef up the tale.

It didn’t do much in the awards ceremonies and the early promise lost later on. A cool soundtrack and period feel keeps you on board for the denouement but very much a 3/5 movie. It’s a shame as it could have been a lot more with the central premise. It just needed more substance with the style.