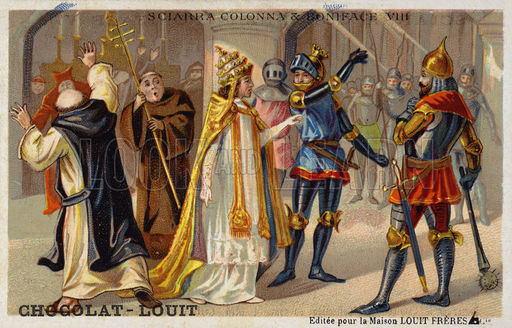 King Philip IV of France (reigned 1285 to 1314) is known to history as Philip the Fair, on account of his blonde hair and good looks, but whether he acted fairly towards the Roman Catholic Church and Pope Boniface VIII (Pope from 1294 to 1303) is a matter for debate.

Philip and Boniface shared certain character traits, such as arrogance, cunning and ruthlessness. Boniface had shown his true character by the way he became Pope, namely by forcing Pope Celestine V to resign and then taking his place, after which Celestine was imprisoned and died ten months later.

Philip was keen to gain some of the wealth of the Church for himself, so he levied taxes on the clergy and imprisoned a French bishop as a means of gaining secular control over the clergy. Boniface’s response was to excommunicate Philip.

Philip reacted with fury and dispatched a small army, under Guillaume de Nogaret, to confront the Pope at his summer palace at Anagni, which is about 45 miles south-east of Rome. Nogaret was joined along the way by Sciarra Colonna, who had his own quarrel with Pope Boniface.

Nogaret and Colonna reached the palace on the night of 7th September 1303, and had no trouble the following morning in breaking down the barricaded doors in order to confront Pope Boniface. The cornered Pope, now effectively a prisoner of King Philip, expected to be killed on the spot, but Nogaret preferred to humiliate Boniface instead.

Nogaret and Collona openly discussed in front of Boniface and his papal court what they should do with him, including executing him on the spot, which reduced the elderly man to a quivering wreck. They then read out a list of charges that Boniface should answer, including heresy, idolatry and sodomy, slapping him across the face as each one was announced. They then left the room.

Boniface was now a broken man, having been mortified and treated with contempt. The excommunication of Philip was promptly forgotten about and Boniface returned to Rome. He died there only a month later.

This was a rare instance in medieval times of a Pope who tried to impose his will on a civil ruler but was then thoroughly put in his place.