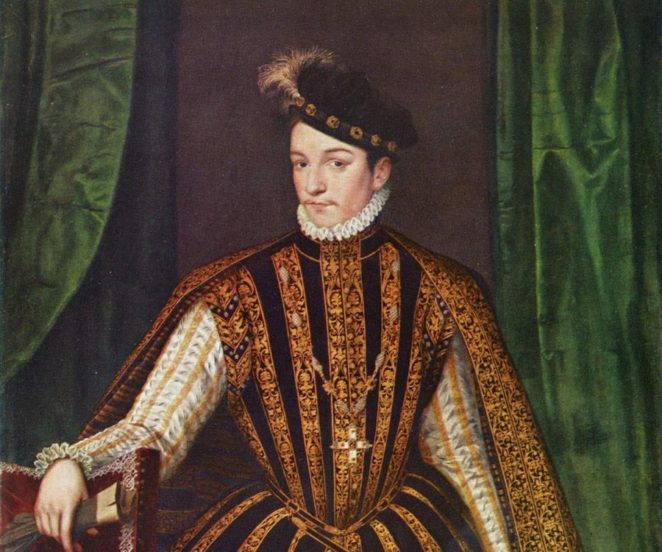 King Charles IX of France died on 30th May 1574 at the age of 23, probably from tuberculosis. However, the stories that arose shortly after that time painted a much more sinister picture, with his death being attributed, one way or another, to his mother, the scheming regent Catherine de Medici.

Charles was born on 27th June 1550, the third son of King Henry II. Henry died in 1559, leaving the throne to his eldest son Francis, who died the following year at the age of 16. With Henry’s second son having died in infancy, this left Charles as the new king, aged only 10.

The real power behind the throne right through Charles’s reign was Queen Catherine, who used her position to further the cause of Catholicism in France, at the expense of the Protestants who were generally known as Huguenots.

Things came to a head on 1572 when Charles agreed to his mother’s plan to wreak terrible vengeance on the Huguenots in what became known as the St Bartholomew’s Day Massacre, resulting in the deaths of thousands of people – the exact number is not known – throughout France over a 7-day period.

Charles felt intense guilt at what happened, especially after he saw a flock of crows perch on the roof of the Louvre in Paris and imagined their cawing to be the cries of dying Huguenots. He started to have terrible nightmares and his health began a terminal decline.

One story concerning Charles’s death was that he was accidentally poisoned by Catherine de Medici. She was supposed to have presented her Protestant son-in-law Henry of Navarre with a book on falconry, but to have sprinkled arsenic on its pages.

However, before the book could be presented to Henry, Charles inadvertently handled it and got arsenic on his fingers, which then touched his lips. He was seized with nausea and a burning sensation in his mouth and throat, and he died within a few hours.

This story does seem to be unlikely, not least because a small amount of arsenic touching the lips would not have had such a dramatic effect. It is generally thought that the story was put about by Huguenots as part of a campaign of hatred against Catherine.

A far more dramatic tale, and one that is even less likely to be true, suggests that Charles died of terror after Catherine had instituted a ceremony that involved black magic.

According to the story, when Charles was tormented by guilt and apparently close to death, Catherine decided that the only way to save him was by means of a black magic rite known as the Oracle of the Bleeding Head.

At midnight, Catherine and her chaplain brought a young child into Charles’s room, gave him Communion then beheaded him on an improvised altar. The chaplain called on the Devil to speak through the dead child’s mouth, and this he did, crying out “Vim patior”, meaning “I suffer violence”.

This terrified Charles so much that he shouted out “Take the head away! What streams of blood, how many murders! What wicked counsel I have had!” He continued to scream until he gave a final groan and died.

Apart from the huge improbability of such an event ever having happened – who, for one thing, would have reported it? – it is hard to imagine how Catherine could have supposed that this was a method that would save the life of her son.

The only element of the story that has a ring of truth to it is that Charles did suffer huge pangs of conscience over the St Bartholomew’s Day Massacre, for which he had given the order at his mother’s behest. His final years were indeed sombre ones, given that his sensitive and unstable character was completely at odds with that of Catherine de Medici.

As for Catherine, she continued to wield a dominating influence over the monarchy of France. With Charles dead, the throne now passed to his younger brother Henry, who ruled as Henry III until his own early death – by assassination – in 1589. Catherine had died earlier that year at the age of 69.