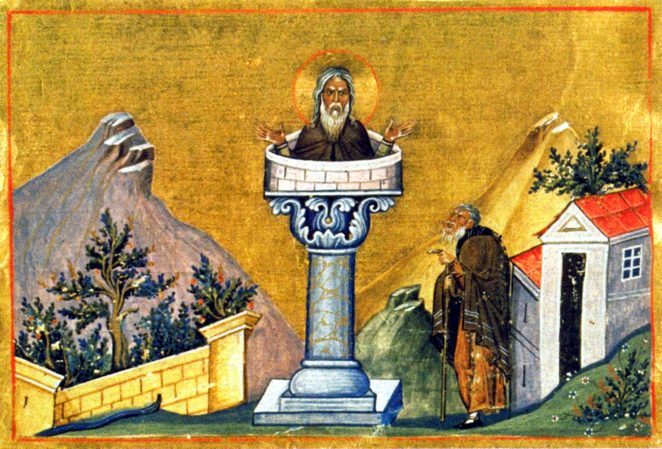 11th December is the saint’s day for a 5th century ascetic hermit who is generally known as Daniel the Stylite because of his decision to spend his later years living on top of a pillar (the Greek for pillar is “stulos”).

The most famous “pillar saint” is Simeon Stylites who adopted this lifestyle at a church near Aleppo, Syria, in order to get away from the crowds of people who kept badgering him for prayers and advice. For the necessities of life he depended on small boys who would climb up the pillar to bring him food (and presumably remove any waste matter – but history seems to be silent on this point!).

As a young man, Daniel was taken to see Simeon on his pillar and he was clearly impressed, especially as Simeon allowed him to climb the pillar to receive a blessing.

Daniel lived in a nearby monastery, where he was invited to become abbot when the previous incumbent died. However, Daniel refused, preferring to spend several years wandering about on various pilgrimages until settling down to live alone in an old temple near Constantinople.

When Simeon died in 459, Daniel decided to copy his example and live on a pillar, which he did for the next 33 years, shortly before he died at the age of 80.

Daniel refused to come down to ground level for any reason, including his ordination. Instead, the Patriarch of Constantinople had to say the first part of the service at the foot of the pillar and climb up it for the laying on of hands.

People came from far and wide to seek the saint’s wisdom, including two emperors. The only occasion on which Daniel is known to have come down from his pillar was to chastise one of the emperors face to face.

It was a strange lifestyle choice, although Daniel was not the only early Christian to take Simeon as a role model. Presumably the stylites thought that they were halfway to Heaven, but they must have realised that it was hardly a selfless way of so being, given that they did absolutely nothing, in a practical sense, to provide for their physical needs and depended on other people in order to keep them alive. No doubt the prayers and blessings those people received were regarded as adequate payment.