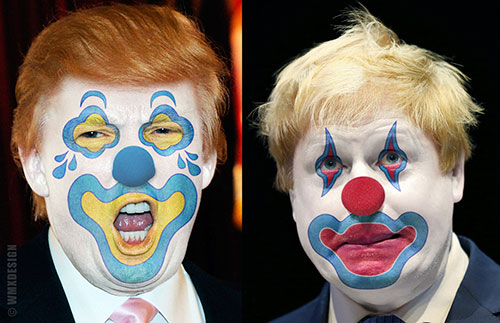 Those of us in the Third World have been ridiculed, treated as, well, 3rd rate.

Our politicians and policies have always been subject to scrutiny, criticised, and victims of various kinds of ‘sanctions’ by the First World, especially the United States, and to a lesser extent, the United Kingdom.

Since 2016 and the election of Trump in the United States, we’ve laughed until our belly bust.   To see that fat clown with an I.Q. beneath Forrest Gump, speaking in that whiny voice, saying such stupidity has been that kind of karma we’ve read about.

In 2020, seeing those racist fools attack their own Capital Building, walking around, stealing, crapping in corners, elevated us beyond expectation.

And as Boris Johnson replaced Trump as the World’s top clown, we looked at each other with increased respect, because such a person would not be elected in our countries.

With both of them being out of power we were a bit worried that the United States, and again, to a lesser extent, the United Kingdom would push their noses back into our lives with their decrees and domination.

Happily, Trump is stirring up dissension, going for a Civil War, because if he can’t have power no one else can.  The U.K. replaced Johnson with Truss, who had as much contact with the people and reality as a drunk lying in the gutter. Forced to resign, the U.K. is thinking of recycling Johnson.

Gone on their days of the great United States of America and United Kingdom.   Never again can they attempt to play superior or regain whatever respect they had.

If Trump returns to power our nationals in the U.S. better make plans to depart because if you thought he was racist before, he might reintroduce slavery now.

And if Johnson returns, we need to make alliances with the Labour Party because he’ll be voted out as soon as elections are called.  That is if they call elections. For who knows how deep into darkness the U.S. and U.K. are about to plunge?

For us, who receives most aid and assistance from China, we won’t experience any dislocation.

It’s funny, when China ‘invaded’ Africa, moved across to the Caribbean, then into other nations, we were worried.  But considering that all China wants is money and couldn’t care if our government is capitalist, communist or cannibal, we’ll advance without the CIA and British agencies digging and interfering.

Sorry for you guys living in the First World.