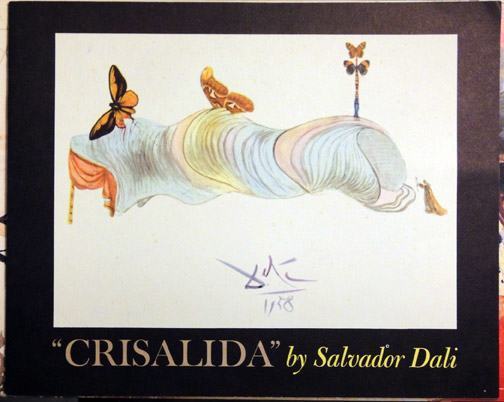 Salvador Dali is huge and it seems that every day becomes more and more; Dali is a major player surrealist anecdotes, model mustached guys, favorite painter of many and inexhaustible source of inflated obscure quotations and illustrations. We choose 5 favorite illustration enterprise Salvador Dali, and believe me it was not easy to choose because the man is really like to illustrate this: Not for nothing Breton his name figured anagram Avida Dollars (eager dollars).

1. Crisalida (1958) There is no better way to promote it to your new drug against anxiety than to assign Dali for marketing. Apparently, Gala Dali proposed by the leaders of Miltown pharmaceutical companies to recruit her husband for his new drug against mental unrest and so gave taken part in the “experiment – the transition from mental visualization of riots in peace.” Crisalida was huge installation sleeve into which they only rarely dared to enter; its interior was painted murals representing various stages of achieving mental health. This tunnel was wrapped in silk walls that are reminiscent of the skin and that is presented at the annual meeting of the American Medical Association. Doctors and pharmacists were given a pamphlet with illustrations Crisalide how worthwhile and requisition in such meetings. One of the main motives was a butterfly who was Dali was a “nirvana of the human soul.” After this event, gave reporters modestly said that peace is a necessary condition for the emergence of genius and continued more modestly explaining (and somewhat lying) that his company representatives approached with an offer for a job because only in his paintings can be found this incredible serenity. He added: Only I was able to create Crisalide! Picasso? Almost, but he is a little too modern … I’m the only one that combines everything – philosophy, psychology, science, and love. It is not known what the doctors thought the Dalijevoj crisalide, although he saved a testimony that compares with a piece of armor. However, sales of the drug increased rapidly to 14 months after its launch, meprobamate has become the fastest-selling drug in America. It seems that Dali’s advertising work, and has managed to perpetuate Miltown how to mortals “to move out of malice nightmare to marvelous and celestial dreams.”

2. Jerusalem Bible (1970)  close to the heart of the issue of Jerusalem Bible decorated with Dali’s excellent color illustrations. Among the bright red cover of this fairly large book will easily recognize 32 Dali’s illustrations in color and remains enthusiastic; Biblical scene covered in Dali manner should appear even more brutal than usual and forced to . It seems that the artist generally tended to illustrate the Bible.