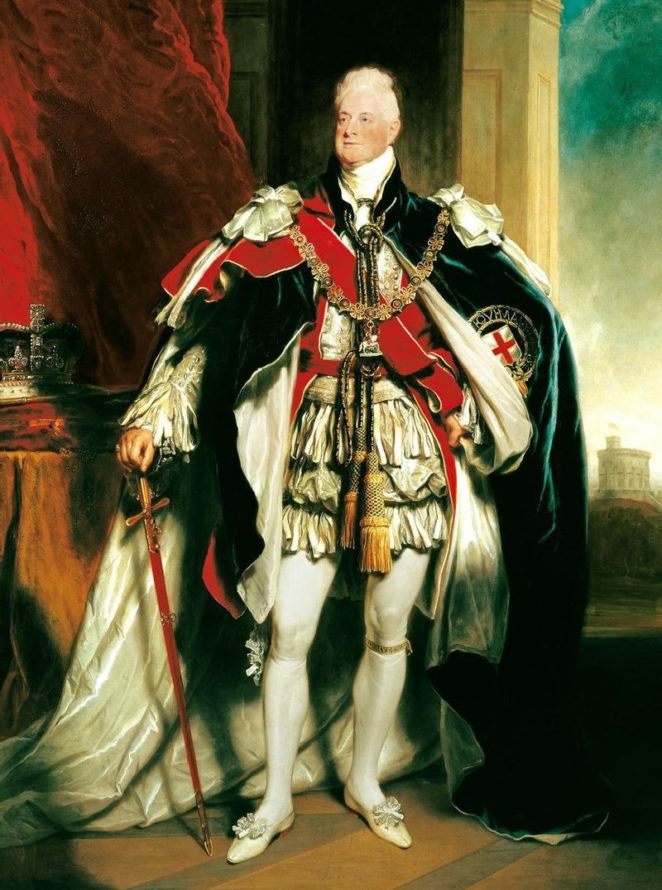 Born on 21st August 1765, William was the third son of King George III and would not have expected ever to become King.

He joined the Royal Navy in 1779 and served in America and the West Indies. He was promoted to Admiral of the Fleet in 1811 and Lord High Admiral in 1827. This service was what gave him the nickname of “Sailor King” during his later reign.

He married Adelaide, daughter of the Duke of Saxe-Meiningen, in 1818, but the two daughters born to the marriage died in infancy. This was in contrast to the nine healthy children that William had previously fathered with an actress, Dorothy Jordan, with whom he had lived between 1790 and 1811.

From 1820 the throne had been in the hands of William’s elder brother George (as King George IV), but his sole legitimate daughter (Charlotte) had died in 1817, leaving him without an heir.

Next in line should have been Frederick, Duke of York (satirized as ‘The Grand Old Duke of York’), but he died in 1827, also without leaving any legitimate children behind him.

The first part of William’s reign was largely given over to the political crisis surrounding electoral reform, which concerned doing away with the medieval and highly undemocratic methods then in force for electing Members of Parliament.

William was completely opposed to reform, which would have meant a huge diminution of aristocratic privilege and the involvement of the middle classes in the business of government. He used every means at his disposal to frustrate the efforts of reformers, but he could not prevent the election in November 1830 of a Whig government, led by Lord Grey, that was determined to push reform through.

Grey exacted a promise from King William to appoint enough Whig peers to enable his reform bill to pass a vote in the House of Lords, but William later tried to go back on his word and only reluctantly allowed the “Great Reform Bill” of 1832 to become law.

Although William was not particularly active in the political sphere, he did try, in 1834, to exert influence on who should be Prime Minister. Lord Melbourne had succeeded Grey in July 1834, but William did not like the reforming nature of the Whigs and dismissed Melbourne in November, appointing the Tory Robert Peel in his place, despite the latter’s lack of a Parliamentary majority. Peel’s government soon fell, leading to the return of Lord Melbourne as Prime Minister for the rest of William’s reign. William was the last British monarch to make such an appointment against the will of Parliament.

Despite his innate conservatism and elitism, William was a popular monarch with the British people and was surprisingly informal in many of his personal ways. For example, he was known to issue open invitations for anyone to dine with him, in informal dress, at the Royal Pavilion in Brighton. He also gave half of the royal art collection to the nation and even tried to give away Buckingham Palace, which his predecessor as King had  spent a huge sum on restoring.

It is to be noted that William’s short reign included the passing into law of several important social reforms, as well as the Reform Act. These included the Factory Act of 1833, the Slavery Abolition Act of 1833 and the Poor Law Amendment Act of 1834.

King William IV died on 20th June 1837 at the age of 71. His younger brother Edward, Duke of Kent, had died in 1820, but he did have a surviving daughter, aged 18 at the time of William’s death. She was therefore next in line to the throne and was to enjoy a long and extremely successful reign as Queen Victoria.