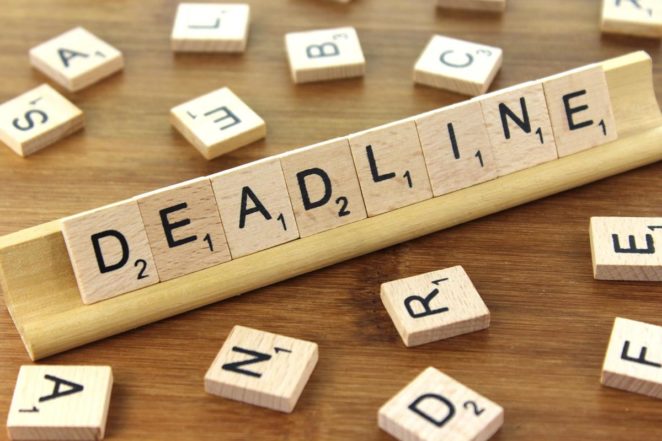 (This was a piece submitted to the Hinckley Scribblers, the Friday morning writers’ group to which I belong)

A deadline is a demand that something be done by a certain date and/or time if unfortunate consequences are to be avoided. For many people this is a horrifying prospect, but for others a deadline presents no fears and may even be the spur they need to get done what might otherwise be left undone.

Journalism is an area where deadlines rule, and nowhere is this more evident than among the fraternity of sports journalists who may, for example, have to watch an evening football match and ensure that their report of it lands on everyone’s breakfast table the following morning.

Reporters have evolved various mechanisms for making their deadlines achievable, such as writing much of the text in advance and slipping in the details later. If you only have 500 words to write, then starting your piece with: “East Cheam Athletic travelled to Mudchester United last night knowing that only a win would keep alive their hopes of avoiding relegation from the Third Division of the Scribblerian League” is a good move that says absolutely nothing about what actually happened on the night. That’s thirty words polished off at the outset with only another 470 to find.

Unfortunately, some sports reporters have taken this technique a little too far, having realized that it is quite possible to write a report without actually turning up. Just get a mate to phone you the score and name the scorers, for the price of a pint at the pub, and you can easily cobble something together in double quick time without ever leaving the comfort of your own home on a cold winter afternoon.

There was once a reporter who came badly unstuck when applying this method, on a day when the mate with the phone hadn’t actually been to the match either but still wanted his pint and phoned in an entirely fictitious score. Readers of the following day’s newspaper report wrote in to complain that the reporter must have been very unobservant not to have noticed that the match had been called off at half time due to dense fog.

We all remember having to meet homework deadlines at school. Essays had to be completed within a set number of days or grave consequences would follow. I had a friend who did extremely well at school but who always seemed to miss essay deadlines. He was consistently the last person to hand in his work, sometimes several days after everyone else had done so. He later admitted to me that this was a deliberate move on his part, especially where history essays were concerned. Having discovered the advantage of late submission he made sure to repeat the tactic every time.

The idea was to play on the psychology of one particular history teacher. Every week he would receive a batch of essays from our class of twenty or so pupils. Every week he would have to read twenty almost identical accounts of a particular piece of history, each copying bits of the textbook in slightly different configurations. His boredom threshold was not all that great, so he would skim through most of the essays, add a bit of red ink here and there to show that he had bothered, and award marks that were roughly the same in all cases.

But then he would come across the late submission from my friend, this being the answer to the question set the previous week. Suddenly the teacher would be reading something that was completely different and his interest would be re-awakened. My friend would always get a higher mark than everyone else – not because his work was noticeably better than everyone else’s, which it probably was not, but because of its novelty value.

The moral of that particular story would seem to be that if you miss the deadline you will stand out from the crowd. That is almost certainly true, but it could be a dangerous tactic if you stand out for the wrong reason.

It cannot be doubted that some people, especially in the world of the arts, thrive from having to meet deadlines and often produce their best work when under severe time pressures.

Of nobody was this more true than the opera composer Gioachino Rossini, who was blessed with the ability to be able to write at breakneck speed when so required. The story of the composition of the overture to The Thieving Magpie – if it is true, and it might not be – bears this out.

The premiere of the two-act opera was scheduled for the evening of 31st May 1817 at Milan’s famous opera house, La Scala. On the afternoon of the day in question, Rossini turned up at La Scala to be faced by a very worried theatre producer who said that the musicians had all the music they needed apart from the overture. Where was it?

Rossini replied that he hadn’t actually written an overture. Just for once, he said, what about staging an opera that launched straight into Act One? The producer thought differently. Every opera he had ever produced began with an overture, and this one would be no exception.

He therefore bundled the composer into an upstairs room, supplied him paper, pens and ink, and gave him a strict deadline. He would sit down there and then and write an overture in time for the evening performance. Rossini did precisely that. As each sheet of music was finished it was dropped out of the window where it was caught and handed to copyists who made out the parts for the orchestra. Rossini finished the overture, the performers played from sight without rehearsal, and the opera was saved from the ignominy of being incomplete.

That particular overture is generally regarded as being one of Rossini’s finest. His genius shone through despite the extreme conditions of the deadline. Who knows if it would have been as good if written under different circumstances?

Other writers – of music or words – have a very different attitude to deadlines. One who refused to take them seriously was the much lamented Douglas Adams, the author of The Hitchhiker’s Guide to the Galaxy. I will conclude with a quote from Douglas Adams that I have always liked:

“I love deadlines. I love the whooshing noise they make as they go by.”