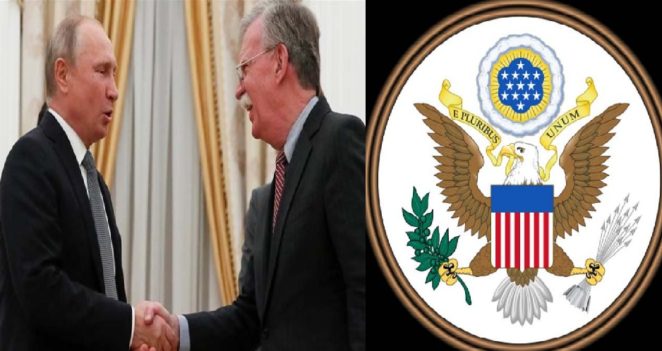 Moscow: Russia’s President Vladimir Putin said after meeting with US Adviser for National Security John Bolton, that has America not saved any other option for peace and only war for others?

During the meeting, Russia’s President said that despite eliminating the nuclear weapons agreement, President Russia will keep this Issue on agenda and will talk to President Trump on the issue. John Bolton, the US National Security Adviser, said that US has decided to eliminate the agreement after Russia continuous violation of the 31-year-old agreement.

America is not afraid of Europe nor the decision to end the agreement has been under pressure. Adviser National Security said further that China is still preparing nuclear weapons, so it was necessary to maintain the balance of power in the region. The Russian President responded, “The US sometimes surprises Russia with its outbreak measures and decisions, just like recent decision which has suddenly been denied from the expansion of nuclear weapons agreement.

Russian President commented on US official seal while commenting, do America have peace for themselves and arrows for others, since american official stamp seal saying something else.