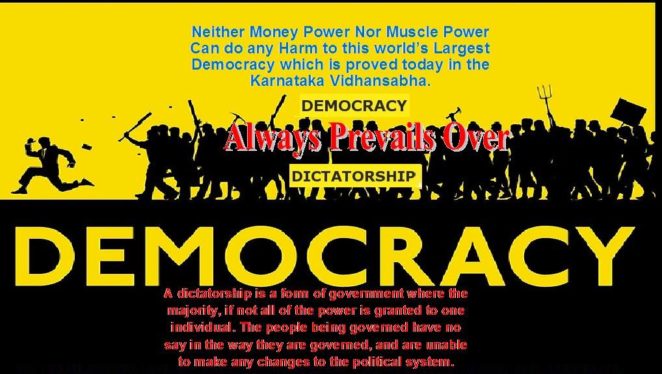 As I had even claimed earlier in some of my articles and social media posts before counting of KARNATAKA state Assembly Election on past 15th may 2018 that BJP (Bharatiya Janta Party) can not able to form the Government despite their status of single largest political party with 104 seats .

Exactly it happened just an hour before which proved Democracy always prevails over Dictatorship and autocratic Mindsets.

As per the Constitution of India, if no coalition has been built up before election, a coalition can be formed after voting which is known as Post-Poll Alliance. After out come of the result Congress party was the 2nd largest political party in the state of Karnataka with 78 seats and a regional party headed by the then Prime Minister of India Shree H D Devegowda, JDS(Janta Dal Secular) got 37 seats.

Indian National Congress, without any condition offered full support to JDS and appealed to claim to Governor of the state to form the Government. JDS, headed by Mr. Devegowda’s son Kumaraswamy even wrote the letter of claim to the Governor of state with the claim of total 115 elected members of State Assembly to form the government on the basis of post poll alliance with congress along with support of a BSP(Bahujan Samaj Party) which ultimately aligned with total 116 Numbers. For forming the government the required number is 112 .

But unfortunately like a rubber stamp in the hand of BJP ruled Union Government of India, passing the strictures of Constitution of India called on the BJP to form the government with the time limit of unexpected 15 long days. But the Supreme Court kept silent over the issue of post poll alliance which empower the JDS to form the government in the state.

As per the rules of the constitution of India, Congress party knocked the door of Supreme Court in regard to the issue. The Highest demiurge of the Nation sidelined Governors order of 15 days and ordered the BJP to show their majority within 48 hour whose day of test was today in the past 4 P. M. .

BJP tried their best used all of their money power, muscle power with offering 100 of crores to other party’s MLA from Congress and JDS.

Even the designated Chief Minister before the test of trust by using the voting method of Number Game , unprecedentedly resigned live when felt the required number is not with them.

Therefore I called it the defeat of dictatorial mindsets and victory of World’s largest democracy in the land of Incredible India.