source of the photo above:  https://www.maxisciences.com/singe/une-espece-tres-rare-de-singe-araignee-observee-en-colombie_art21132.html

For the letter S I want to present to Virily a little known monkey named in French « Singe-araignée » or in English the Spider-monkey. The Spider-Monkey are New World monkeys who belong to the genus of the Ateles (Atèle) who actually contains seven species of spider-monkeys.

Why are they called « Singe-araignée ». The explanation is very simple. These monkeys who live anywhere from Mexico to Brazil live almost exclusively in the higher layers or canopy of the Rain Forest at an altitude of anywhere between 25 to 30 meters (82 to 98 feet) high.

Another reason for the name Spider-Monkey comes from the fact that the « Singe-araignée » has very disproportionately long limbs and an equally long prehensile tail that serves him as a fifth limb. The tail can measure anywhere up to 89 cm (35 inches) long. Due to this fact, I can just imagine the tribes or the newcomers of the New World looking up to the high branches of the Rain Forest and seeing these limbs sticking out and they just might have thought « Wow, that is one huge spider ». Just look at the photo below which can explain what I just imagined. 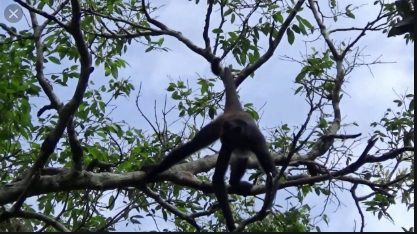 The « Singe-araignée » is mostly black or brown but there are some slight color differences mostly on the face across the different Ateles groups. The most common black Spider monkey weighs an average of 11  kg (24 pounds). The face of the Spider Monkey is hairless in most cases with very far apart nostrils while his body fur is coarse and ranges in color from brown to black.

The « Singes-araignée » usually live in small groups of 10 to sometimes as much as 30 individuals. They also can become quite aggressive when approached by humans. They can make a barking sound and growl at the appearance of humans. If the human keeps on advancing, the spider-monkey, who usually takes refuge in the trees, can break off dead or live branches and let them drop on the humans. They will also either pee or defecate towards the human. So watch out for these pesky animals who are just protecting themselves and their territory.

Spider-monkeys have a diet consisting of 75% to 85% fruits and nuts. It will examine the fruit and nut carefully before eating it making sure that it is palatable and they always swallow it whole, seeds and all.

Spider monkeys have long been seen in Mesoamerican culture like in the Aztec and Maya calendar attesting to their long term residence in South America.

The word « Singe » is the monkey and the word « araignée » is the spider. The pronunciation is like this: Singe is the same as cinge but with an upward inflection to the « in ». « Araignée » sounds just like the first part of arraignment but of course finished with the « ée » sounding like Hey.

Well that’s it that’s all folks. See you soon with the letter T.