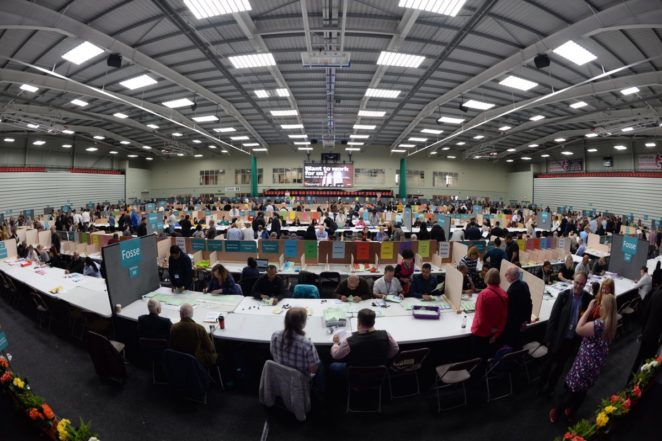 Last night was very interesting! I was one of an army of vote counters at the Morningside Arena in Leicester where the votes were counted to provide the results in three constituencies in the UK’s latest General Election.

I was assigned to Table 23, in the middle of the hall, which counted the votes for Wycliffe ward in the Leicester South constituency. This was previously held by Labour’s Jonathan Ashworth, who had served as his party’s health spokesman. He is an important member of the Labour Opposition and is often seen on TV whenever a health-related issue arises. He was defending his seat against four opponents.

Things go off to a slow start on Table 23, mainly because our first ballot box did not arrive as soon as might have been expected. Wycliffe is in the centre of Leicester, as is the Morningside Arena, so the boxes did not have to travel very far.

We therefore started with the postal votes, which were already in place, the job being to verify that the number of votes was the same as had been reported in advance.

When the first ballot box arrived all the papers were tipped onto the table, so the task was to unfold them, turn them face up, and count them into bundles of 20. The number of papers had to agree with the number of papers that had been issued at the polling station. There is often a discrepancy here, so the next job is to recount them to see if any mistake can be put right. In our case we were three papers short, but these were found the second time round.

We had four ballot boxes in total – two from each of two polling stations – so the verification process had to repeated before the next stage began.

The counters – there were six of us on Table 23 – were then split into sorters and counters. The job of the sorters is to split the ballot papers between the candidates for whom people have voted, this being done by throwing the papers into coloured trays, one for each of the five candidates. Once there is a sufficient number in a tray, these are then taken to the counters to be counted into bundles of 20 and fastened with a bulldog clip. The bundles are then grouped into fives, with a large rubber band, and the bundles of hundreds are placed in compartments on another table.

All this activity takes place under the gaze of election agents and candidates, who may stand or sit on the other side of the sorting/counting tables and point out any errors that they think have been made. They are not allowed to touch any ballot papers, which is why the tables are broad enough to allow the counters to work in comfort without any papers crossing to the other side.

As the trays filled up the proportion of counters to sorters changedd. We started with four sorters and two counters but ended with two sorters and four counters. I was one of the sorters throughout the process.

The General Election turned out to be a disaster for the Labour Party in overall terms, with many seats lost – mainly to the Conservatives – across the country. However, this was not the case in Leicester, and especially not in Leicester South, where Jonathan Ashworth won with a majority of more than 20,000 votes. That was very clear from the votes we counted in Wycliffe, which is a strong Labour area. This meant that the Labour tray on our table kept filling up with ballot papers and the others filled up much more slowly.

One extra job to do when sorting is to look out for “bad and doubtful” papers. These are ones where the voter’s intention is unclear for one reason of another. The sorters are not expected to decide the issue unless it is an obvious one, such as a tick being used instead of a cross, and so there is an extra tray for this purpose. There is a team of senior election officials who make decisions as to what the voter intended.

(One of my colleagues recalled an election where a voter had written “bastard” against the name of every candidate apart from one, who was described as “not bastard”! This vote was subsequently allowed to be counted).

When all the votes have been counted, the table leader fills in a form with all the numbers of votes for each candidate. There can be a problem at this stage if the total number does not agree with number of papers recorded at the verification stage. In such a case it is necessary to unbundle all the papers and count them again! This did happen on some other tables near us, but we got it right first time and were able to sit back and have a chat with each other while lots of recounts went on elsewhere!

Counters are not allowed to leave until all the declarations have been made and the winning candidates have made their acceptance speeches. This is to allow for the possibility of a candidate insisting on a full recount because the result is close enough for possible errors to have swayed it the wrong way – from their point of view, that is.

Last night was particularly interesting due to the fact that by the time the declaration were made, at around 2 a.m., results from around the country were showing that the Conservatives were going to win with a sizable majority. The counters, who had been prevented from using mobile phones while the count was taking place, had very little idea of what was going on elsewhere, so the tone of the acceptance speeches was somewhat surprising.

Two of the winning candidates, Jonathan Ashworth and Liz Kendall (in Leicester West) are long-established Members of Parliament who are well-known nationally and not just in Leicester. Their speeches were strongly worded in terms of giving warnings about what a Conservative Government under Boris Johnson was going to mean for the country.

I have taken part in election counts before. Despite the severe disruption to sleep patterns, it is something I love to do, especially as it means being part of the democratic process and playing a small role in what could turn out to be a significant event in the country’s political history.